Who Warned You to Flee the Wrath of God?

Who Warned You To Flee The Wrath of God? 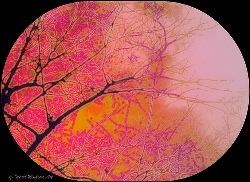 In fact, because these both come from the same stock, many are bewildered and confused about their identity. John, the baptizer, announcing the coming wrath of God upon those who

claimed to be sons of Abraham.

John the Baptist Warned of the Imminent Wrath of God

“But when He saw many of the Pharisees and Sadducees coming to his baptism, he said to them, Brood of vipers! Who warned you to flee from the wrath of God about to come?” (Matt. 3:7). It is not proper to generalize the wrath of God in this text. Rather, it is very specific in nature and in the time of its occurrence. The Greek term “mellouses” from “mello” which means about to be. In fact, it is rendered the “coming wrath of God” to indicate that it was already in progress when John spoke! The urgency of this about to come wrath of God is reinforced in John’s statement:

And even now the axe is laid to the root of the trees…” (Matt. 3:10) John spoke not  of a future generation remote from his day. His message centered upon those who came to his baptism, hence the direct confrontation by his question.

Thus, we cannot so interpret, or shall we say misinterpret the message to apply it to a 21st century audience. Were we reading Shakespeare, such notion of extrapolating the events described in Macbeth to our day and time would be ludicrous.

Throughout the New Testament, the focus of this “about to come” wrath of God remained the same, i.e. directed to the same audience and within the same time frame. Who were they? Those who claimed to be “sons of Abraham.” Yet, John designated them as the “offspring of vipers.” These Pharisees and Sadducees were Jews who opposed Christ and his mission. It is God’s testimony that not all Israel would be saved? Why not? According to John, they refused to bring forth fruits of repentance.

The Wrath of God in Romans

When reading about the wrath of God in the epistles, this same audience must remain in focus. Paul, cites the same wrath og God, the same people and the same reason for their condemnation. “But in accordance with your hardness and your impenitent heart you are treasuring up for yourself wrath in the day of wrath and revelation of the righteous judgment of God.” (Rom. 2:5)

Moses Prophesied of the Wrath of God

Speaking of the last days of Israel and their ultimate destruction as a nation in Deuteronomy 32, God designates them as:

John, the Baptist, Jesus, and Paul used these terms to describe those of Israel who rejected Christ and the gospel message.

Hence, they were the subjects of the imminent wrath of God.

“Is this not laid up in store with Me, sealed up among my treasures? Vengeance is mine, and recompense; their foot shall slip in due time; For the day of their calamity is at hand, and the things to come hasten upon them. For the Lord will judge His people. (Deut. 32:32–36). The last days messengers in the New Testament merely exposed to unbelieving Israel the wrath of God in the Law of Moses.

Who Warned You to Flee the Wrath of God?

In his earlier letter to the Thessalonicans, Paul emphatically states that the wrath of God to come directly applied to those who murdered their own prophets, crucified Jesus, their own Messiah, and were yet persecuting the saints.

“For you, brethren, became imitators of the churches of God which are in Judea in Christ Jesus. For you also suffered the same things from your own countrymen, just as they did from the Judeans, who killed both the Lord Jesus and their own prophets, and have persecuted us; and they do not please God and are contrary to all men, forbidding us to speak to the Gentiles that they may be saved, so as always to fill up the measure of their sin; but wrath has come upon them to the uttermost. 1 Thess. 2:14–16, my emp.)

Wrath of God At Hand in the Book of Revelation

The message of God’s wrath against the unbelieving nation finds its consummation in Revelation. The book describes events which were at hand and shortly to come to pass, (Rev. 1:1–3, 22:6, 10). It is the message of God’s wrath to be poured out on those whose outward claim to be Jews revealed them inwardly as the synagogue of Satan, (Rev. 2:9, 3:9).

Thus, the message is consistent throughout the New Testament that the Jews were the direct objects of God’s wrath from John the Baptism in Matthew, to John, the Apostle in Revelation. Luke, once again citing Deuteronomy 32 as his source, declares the destruction of Jerusalem in 70 AD as the time when all things which were written were fulfilled. He equally affirms that event as the time of great distress (the great tribulation) in the land and wrath upon this people, i.e. the Jews of his generation., (Luke 21:20–23, 32.

Still wondering how it all fits together. Get the total picture of the wrath of God upon first century Israel in The Re-Examination, A Study of the Lord’s Return in 70 AD.