What is the Meaning of the End of the Age in Eschatology?

What is the end of the age in Matthew 28:20? Does this mean Jesus
is no longer with us after the events of 70AD?

First, we will cite the texts, make a comment or two, then expose the
illogical implication behind the question. 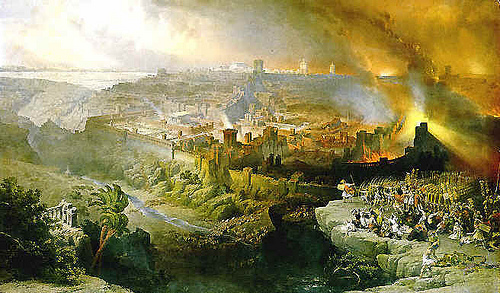 Now, the issue before us is to identify the end of the age in the text in
question, Matthew 28:20.

Here’s the question above presented here in the form of an argument.

Now, I’m sure that sounds pretty good to those who oppose the preterit
view. Consider, the same logic according to the futurist view.

In other words, the only difference between the two views with that logic,
is “time.” So what difference would it make whether in 70 A.D., or in 2012,
if the end result is that Jesus is no longer with us? That’s faulty logic.

The fact of the matter is, the verse is not a reference to Christ being with
us in terms of our relationship to God.

It rather speaks of something more specific, directly related to the 1st
century apostolic ministry, as noted from the parallel account in Mark.
It’s a good suggestion to read, Mark 16:17-20.

The subject is the power and ministry of the Holy Spirit given to the
apostles through the “authority” of Christ. They are allowed to impart
that power to believers (those who accept the gospel) through the
laying on of their hands, (Acts 8:14-18).

The point of the text however, it not on the believers per se, but on
the authority given to the apostles. Mark 16:20, the parallel text says
the “And they went out and preached everywhere, the Lord working
with them and confirming the word through the accompanying signs.
Amen.”

Therefore, after Christ’s ascension while he is in heaven, (v. 19), he
works with the apostles through the miraculous signs (discussed
above), which he shed forth on Pentecost of Acts 2, (1-4) and which
would continue until the great and awesome day of the Lord (2:20).

Matthew simply adds that Christ would be with them, “Lo I am with
you.” –“you” who? The apostles. How? In confirming their words
through the signs until the end of the age, i.e. the Jewish age.

That eliminates the faulty logic suggested in the question. It remains
true to the context. It shows the harmony of the use of the phrase
“sun teleia tou aionos” to “always” refer to the Jewish age.

Finally, I will offer the following chart from Ephesians which should
help to show that Jesus lived in the Jewish age.

Galatians 4:4, states, “But when the “fullness of the time
had come, God sent forth His Son born of a woman, born under the
law.”

Therefore, the “fullness of times” refers to the Old Covenant age in
which Jesus was born and died, (Heb. 9:26).

Ephesians shows us that the fullness of times stands over against and
opposite to (see chart above) the age to come, and lines up time wise
with ‘this age’ (Jewish) and the ‘age of this cosmos,’ which are one
and the same.