What is the Meaning of Revelation 22-12? 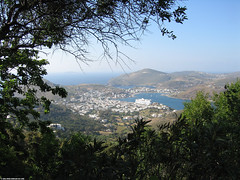 In a few minutes I will share with you
a message about What is the Meaning
of Revelation 22:12?

Before I do, let me recap an event which
happened on yesterday.

As we were riding home in the car on
yesterday, my grandson and grand-
daughter decided to spend the afternoon
with us.

They often come over on Saturdays, because they like to eat large helpings of grandmothers Sunday dinners.

During our ride home in the car, my grandson brought up questions about

words I used in a benediction.

To me they were simple words, but he made it clear that he had no clue what those words meant. That lead to some interesting conversations during the drive home.

One of the topics he brought up was  end of the world and the coming of Christ.

He said that all the kids at school were chiding him for saying that God would never destroy the world. I told him I get that a lot also! He had read to them from Genesis 8:21–22.

That text says, just the opposite of Gen. 6:5–8. God promised to destroy all “living things” from the earth with the exception of those that were on the ark because the thoughts and intents of man’s heart was continually evil. So, God brought the flood and destroyed life from the earth.

However, after that event, when Noah worshiped God, he promised never again to destroy the world (translated as the ungodly, 2 Pet. 2:5), —even thought man’s heart was evil from his youth, as he had done.

God confirmed it with the sign of the rainbow. Instead he promised continual seed time, harvest, and the change of seasons would not cease. Then my grandson said they wanted to discredit the text he cited, because it was in Genesis while they were reading from the Book of Revelation.

So, I told him the Bible never contradicts itself and therefore, whenever one reads about the end of the world it’s must be discussing something other than the material creation. He had one of those “deer in the headlight stares.”

So, I went on to talk about Revelation in as simple terms as I could to help him understand what I meant.

What is the Meaning of Revelation 22:12?

Let’s say Walmart comes out with a sale in this Sunday’s paper May 2nd, that starts at 5am Friday through Saturday, May 8–9. “Come Quickly to our $300 off Special on HD TV’s.”

So people line up at the door at midnight Friday morning May 8th, eagerly waiting to get the special $300, off on High Definition TV’s. Walmart quickly sells out, the sale is over.

But an interesting thing happens. The following week, millions of people line up at Walmart for the same sale. They read the paper, not realizing the deadline had already passed. They were demanding Walmart to sell them Hi-Def TV’s at $300 off the regular price.

Walmart’s management grabbed a bull horn and tried to calm the people down. When he got their attention, he pointed out, the sale was announced n the May 2nd paper for May 8–9. It was already past. Many of the people were embarrassed they had omitted the detail of looking at the date of the sale.

This is similar to how people interpret Revelation.

They ignore the date and expect a letter written to people living in the first century about an event that would quickly come in their day, to be imminent in the 21st century, in our day and time.

That’s like standing in line at Walmart waiting for a sale that’s already past. The Book of Revelation (not Revelations as there is no “s”), is about things which are “shortly to come to pass.”

God sent the message through his angels to his servant ”John” who lived in the first century. “John” was commanded to communicate it to the seven churches which were in Asia. The time was near for those events to begin. (Rev. 1:1–4).

Those are some of the most important verses in the book. Observe in verse 4, that John addressed the seven churches in Asia in his day.

So, Christ’s words, “And behold, I am coming quickly, and my reward is with Me to give to every one according to his work,” was written in the first century to a first century audience to tell them that his coming was soon to occur and he would come quickly to them.

Today, people are reading the Bible like they read a Walmart sale that is out of date. They are looking for Christ to come quickly to them, when he never promised that.

He has already come and remains present to this day.

Take a moment to sign up for our Rss feed and receive updates. You can also join our newsletter and get access to some great audio messages. To learn more about this topic, check out my book The Re-Examination.