What is the status of the local church post 70 AD? Some see no relevance for the local church after Christ’s returned in the first century. They believe that the church only continued up to that point, claiming it was a Jewish institution. We dealt with that fallacy in the previous article on Israel’s Hope – The Body of Christ. We strongly encourage you to look at some of the points we made.

Since we discussed the “body of Christ” in particular, our focus was on the church as the divine institution sent down from heaven by God, (2 Cor. 5:1; Rev. 21:1-3). It is the tabernacle of God “with men.” It corresponds with the “spiritual body” of 1 Corinthians 15:44, which as a constituent element in the resurrection motif, corresponds to the kingdom of God. This same correlation can be seen in Hebrews 12:22-23 and v. 28 which speaks of the soon coming of the church (the ekklesia) of the firstborn or firstfruits and the unshakeable, unmoveable kingdom. 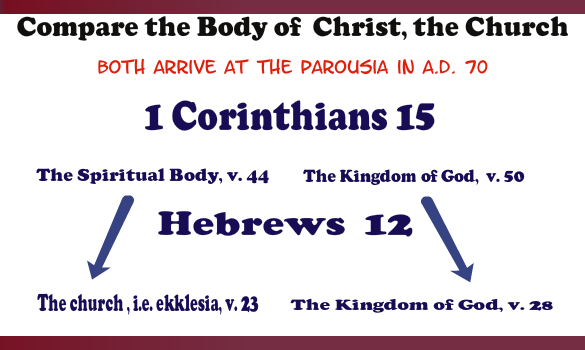 But What About the Local Church?

We believe the above premises on the local church are all false. The Local church is not a temporary institution as can be seen by Christ’s words to the church in Thyatira. After addressing the fate of “Jezebel” (apostate Judah), Christ offers these words of encouragement to the church in Thyatira: “I will kill her children with death, and all the churches shall know that I am He who searches the minds and hearts. And I will give to each one of you according to your works” (Rev. 2:23, emp. mine)

There is no question that Christ is addressing the local church. He said the messages were for the seven churches which are in Asia. He speaks of the end of “Jezebel” apostate Judah, hence AD 70, saying that all the churches shall know when he destroys her. Likewise, they were told to hold fast until he came at which time he would give them power over the nations. In a post AD 70 world according to those who believe the church is extinct, there would be no local churches to rule over the nations.

The Local Church and the Golden Candlesticks

It is obvious in the Book of Revelation that Jesus likens the seven churches of Asia to the seven golden candlesticks or the candelabrum. But, the candelabrum was the subject of prophecy in the types and shadows of the Old Covenant.

How then can the church, or even the local churches be an accident when they were prefigured in the types and shadow of the Old Covenant? We submit they are not accidents but intentional institutions ordained by God through prophecy. This is a devastating blow to the dispensational house of cards.

This brings us to another important point in the study. We are told by Dispensationalists that the local church does not go through the great tribulation but is delivered from it. This is contrary to the Bible. Paul wrote that “through many tribulations” the local church would enter the kingdom of God. Why go through so much trouble to encourage these churches to steadfastness if their survival was only temporary? It makes little since especially since Jesus said promised the faithful that they would receive a crown of life, in death (Rev. 2:10).

Since death ultimately brings the incorruptible body according to the IBD advocates, why the need to encourage people to endure hardship? Why not take death as the easy ticket to eternal life? Obviously, there must be some practical purpose for the survival and well being of the church.

Andrew Perriman citing R.T. France, views God’s warnings and deliverance of the local church from peril and destruction in the Roman conflagration of Judah as that practical answer. Further he shows that the urgent spreading of the gospel (Matt. 24:14) throughout the empire had that very purpose in mind. “By establishing churches beyond the perimeters of the landscape of Judea, the church would have the infrastructure necessary to survive the onslaught of persecution and be able to take root in the cities and countries outside of the perishing nation.”

“The reason for the urgency, therefore, is probably quite pragmatic – that the gospel should be internationalized and the [local] church established beyond the boundaries of Israel before the destruction of Jerusalem and the dispersal of the disciples in Judea.” R.T. France, The Gospel of Mark, 516, quoted in “The Coming of the Son of Man,” Andrew Perriman, p. 28). France’s comments, therefore silences the critics on why the judgment on Jerusalem was important to those outside of Judea. Again, the welfare of the church was at stake!

Revelation shows that the local church, the firstborn ones or firstfruits were coming out of the great tribulation even as John wrote the book. Don Preston carefully makes note of the present tense participle in “erchomenoi” in Rev. 7:14.  In “Charting the End Times, p. 122” Tim LaHaye and Thomas Ice, write: