Signs of the End Times?

Signs of the End Times

No teaching appears to have challenged the status quo on the signs of the end times as has Preterism. As more people become aware of it, more literature and speeches begin to reflect this pendulum swing in the right direction. In time, this can only mean that more people will understand the true significance of the Old Covenant promises and the new people of God. 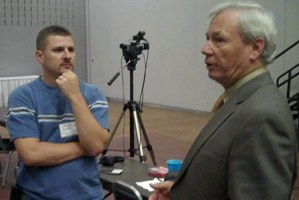 It is the common belief of Dispensational Premillennialism that the state of Israel is the fulfillment of prophecy.

Signs of the End Times Slight of Hand

In John Hagee’s “In Defense of Israel, p. 53, he cites Romans 9:4, as a text that supports national Israel as proof in support of the modern state of Israel. In magic, this would be called slight of hand. First, Hagee is chronologically incorrect. The text applies not to a post biblical 1948 and forward time frame, but to a condition which existed in the first century in the time of Paul. That this verse is not a modern commentary on the signs of the end times should be apparent to any careful reader.

Hagee conveniently stops at verse 5. The next two verses completely destroy the concept of national Israel as God’s exclusive chosen people. “But it is not that the word of God has taken no effect. For they are not all Israel who are of Israel, nor are they all children because they are the seed of Abraham; but, “in Isaac your seed shall be called.”  That is, those who are the children of the flesh, these are not the children of God; but the children of the promise are counted as the seed.” (Rom. 9:6-8). One wonders what brand of cool-aid some bible readers are drinking to accept such a gross misuse of the Scripture.

Stephen Sizer’s Zion’s Christian Soldiers? The Bible Israel and the Church, p. 47, offers the following on the “inclusive” nation of Israel even in the Old Testament. “You shall not abhor an Edomite, for he is your brother. You shall not abhor an Egyptian, because you were an alien in his land. The children of the third generation born to them may enter the assembly of the Lord.” (Deut. 23:7-8).  Remember, again from Romans, “Jacob have I loved, but Esau have I hated.” Edom descends from Esau, not Jacob or Israel, but is clearly Israel’s brother and was not to be excluded from the nation.

The same was true of the Egyptians and others. “I will make mention of Rahab and Babylon to those who know Me; Behold, O Philistia and Tyre, with Ethiopia: This one was born there. And of Zion it will be said, “This one and that one were born in her; and the Most High Himself shall establish her. The Lord will record, when He registers the peoples: This one was born there. ” (Psa. 87:4-6). Neither the Old Zion, nor the New Zion had anything to do with racial exclusivity. Thus a charge of anti-Semitism is ludicrous.

Foreigners And the Signs of the End Times

Foreigners were to have an inheritance in Israel as “native-born Israelites according to their tribe of residence. “Thus you shall divide this land among yourselves according to the tribes of Israel. It shall be that you will divide it by lot as an inheritance for yourselves and for the strangers who dwell among you and who bear children among you. They shall be to you as native-born among the children of Israel; they shall have an inheritance with you among the tribes of Israel. And it shall be that in whatever tribe the stranger dwells, there you shall give him his inheritance, “says the Lord God.” (Ezk. 47:21-23).  This prophecy belong to the “signs of the end times.” Neither Old nor New Testament prophecy teaches exclusivity for Israel.

Finally, Isaiah records, “Do not let the son of the foreigner who has joined himself to the Lord Speak, saying, “The Lord has utterly separated me from His people. Nor let the eunuch say, Here I am, a dry tree.” (Isa. 56:3).

Signs of the End Times and Racism

Thus, to make national Israel, who has nothing to do with Bible prophecy one of God’s signs of the end times is a stretch of the imagination. Paul said he could wish that he were accursed from Christ for his “countrymen” (unbelieving Jews) according to the flesh. (Rom. 9:3). Yes, they did have the adoption, the covenants, the promises, and the law of God, etc, but they were “blinded” and did not obtain that for which they sought. (Rom. 11:7). Because of their “blindness” God brought in the Gentiles through faith in the gospel to provoke Israel to jealousy that he might save some of them through Christ, not through nationalistic racism. That is what the signs of the end times was all about.