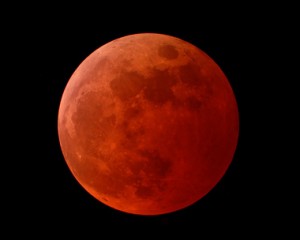 What’s new in prophecy update circles? NASA has a website that details the total lunar eclipses which will occur over the next billion years. When these eclipses occur, they create what appears to be a “red moon.” This is what is believed to be the concept behind Joel’s prophetic sun turning to darkness and the moon into blood.

NASA has tracked that two total lunar eclipses (blood moon) surrounded by darkness occurred in 1948, the year Israel declared itself a state and again in 1967, when they claimed part of Jerusalem. What prophecy update prophets suggest to us is that these were signs of the Bible.

Remember how Hal Lindsey and others predicted that within a generation (forty years) after Israel claimed Palestine in 1948, that the end of the world would occur? Well, that would have been 1988, yet here we are in 2010 and there has been no end of the world.

Futurist dispensational prophets preachers have jumped on the prophecy speculations of Mark Blitz who announced according to Nasa’s findings that we will have another total lunar eclipse (darkened sun and blood moon) on April 15, 2014, (Passover according to Jewish calendar rituals) and the Day of Atonement (October 2014).

Also, it occurs again on April 15th, 2015 and September 8th 2015, again corresponding to the Jewish calendar of that year. They believe these are signs of the end, and the beginning of the millennium. These dual eclipses only occur once in a century. Here’s what I find interesting in the prophecy update eschatology. By the way, that’s not too good for the Mayan Calendar end of the world 2012 date is it?

They have gone to Nasa to identify these dates and have correlated them with events in the Bible that occurred in connected with these eclipses and feast days. But if you noticed above, Nasa predicts the eclipses which will occur over the next billion years.

Why are the prophecy update pundits choosing the year 2014 and 2015 for this end times activity? What will make them any more accurate than Hal Lindsey and Edgar Whisenant of the past century?

This is more end-times ranting end times preachers who are distorting the scriptures. In fact, Nasa is a better predictor of future events than the prophecy update dispensationalists.

Peace in the Middle East, the Anathema of Prophecy Update Rant

What if a peaceful accord could be struck in the middle east? This would send a shock-wave to most all dispensational futurists. Futurists don’t have room in their doom and destruction paradigm for world peace without catastrophic destruction which includes two thirds of the Jews.

The worst thing that could happen on their prophecy time clock is peace in the middle east. Look for my new book coming soon, perhaps later this week which has damaging implications for prophecy update futurists speculation.