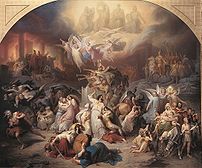 The key to successful interpretation of Bible
prophecy in the New Testament is to always
find it’s source in the Old Testament to unlock
the meaning.

That was the method of the Christ and the
apostles. Prophecy in the Apocalypse: What
is the meaning of Revelation 1:7?, explores
those concepts.

Failure to follow this simple interpretive guideline
leads to unbelief, frustration and all sorts of
fanciful interpretations and doctrines.

Most people pick up the Book of Revelation because of their fascination with prophecy and intrigue for the signs and symbols within. Immediately they assume a posture of predicting the future. Current events,

news reports, and natural calamities supply an unending gold mine of information for all sorts of interpretations. Yet, none of these reveal any satisfying results.

Those who are informed do not need a record of the failed rantings of modern day prophets in the past and present generation who predicted the Rapture, end of the world and the second coming of Christ, only to find out that today, in 2009, all things continue as they were from the beginning of the creation.

Lest I should sound the tune of a scoffer, I am not. Those words are borrowed from true scoffers who lived much closer to the end time than anyone alive today.

When a different viewpoint is offered for the timing or when of the fulfillment of Bible prophecy, Revelation 1:7, is suggested to say that we have not yet seen the Lord come in the clouds. Really?

When we change the source of our prophetic catalog to Old Testament prophecy versus current news events, the prophetic landscape dramatically changes.

For example, the text cited above reads,

“Behold, he is coming with clouds, and every eye will see him, even they who pierced him. And all the tribes of the earth shall mourn because of him. Even so, Amen.”

The text describes Christ’s coming in judgment upon Israel in the last days. The following are the Old Testament sources for the prophecy.

When the Old Testament prophecies are examined, the message in Revelation becomes easily understood.

Daniel speaks of Christ’s coming in the clouds to judge Israel, Dan. 7:13. The context of that passage is the time of Rome and Judah in the days of the Messiah. Since that describes an event possible only in the first century, we must restrict our timing of the text to that historical time frame. More proof on that follows later.

Secondly, the text is also a quotation from Zechariah 12:10-12. There it describes a judgment upon the tribes of the house of David, i.e. Judah for crucifying Christ. (That further confirms our time frame per above that this text is fulfilled in those days).

The tribes or families of the house of David belong to Judah, virtually the only remaining tribe in the Old Covenant at the time of Christ.

Thirdly, this text is quoted with a reference to both Old Testament texts in Matthew 24:30. The key importance of its mention in Matthew is both to further pinpoint the historical time frame of it’s fulfillment, more precisely defining the generation in which it would occur, and thereby suggesting the nature of it’s fulfillment.

In discussing the destruction of Jerusalem (a key point in Daniel’s prophecies (9:24-27; 12:1f), Christ stated that the temple would be destroyed. In connection with a description of the signs preceding that event, Christ quotes our texts above, i.e. Daniel and Zechariah in Matthew 24.

He then says, “Assuredly I say to you, this generation will by no means pass away till all these things take place, (Matt. 24:30). Therefore, that first century generation could not pass until the prophecies were fulfilled.

John’s prophecy concerning every eye shall see him is the direct parallel and quote of Christ in Matthew 24:30. Both have all the same elements. The coming of the Lord, in the clouds, with all the tribes in the land mourning, and seeing him who would come.

The time statements limit that coming to the time of the overthrow and destruction of the temple in Jerusalem, all within the first century generation, Matt. 24:3-34.

Thus, Revelation 1:7, is the fulfillment of Christ’s coming in A.D. 70, within the first century generation in judgment upon Old Covenant Israel.

kThe above video has an interactive quiz that will automatically grade and send you a score. If you’d like to see how well you understand the messeage presented there visit, videoquiz.

Click here to cancel reply.
« Did The Law of Moses Prophesy Till 70 AD?
What Do the Firstfruits of the Spirit Have to Do with Eschatology? »