One Language, One Land, One People 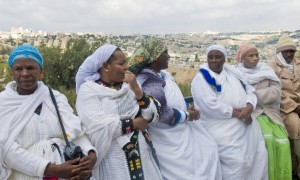 About the 8th century BC, Isaiah prophesied destruction concerning Egypt. YHWH would bring a judgment upon them. Formerly, Egypt attacked and fought against Judah.

But here, the name Judah would become a terror to the Egyptians. Their once furious warriors would become fearful as women.

“In that day five cities in the land of Egypt will speak the language of Canaan and swear by the Lord of hosts; one will be called the City of Destruction.

They speak the one language of the gospel and the salvation of Christ.

Canaan was the land given to the ancient Israelites. To speak the “language of Canaan” means that the majority of the cities of Egypt would abandon their idolatry and adopt the “message” of the God of Israel. They would all speak the “one language” of salvation.

The reference takes us back to Genesis through chapter 10, when all upon the earth spoke one language, literally one lip.  It was through judgment that God confounded their languages. In chapter 11, God confounds their language so they can no longer understand one common language.

Language is what ties people together to their culture. As implied in the one language of God’s salvation message, the history of Babylon’s latter condition was scattering upon judgment. This can only mean that all men spoke one language prior to the Babel event.

The land God promised to Israel was one land. It extended from the River of Egypt to the River Euphrates. Through the Assyrian and Babylonian captivities, Israel had been removed from the land.

Yet, in Isaiah 19:20-25, God promises to bring not only Israel, but also the Egyptians and Assyrians (and Babylonians) back to the land to be one with him. In other words, the whole land would once again be one.

As God brings together the Egyptian and the Assyrian to dwell in peace with Israel, they are no longer three peoples, but one. That is the glorious message of the salvation of the gospel.

There is no exclusivity, exclusion or exaltation of Israel. They are all one and stand on an equal footing before God. There are not two eschatological or kingdom programs, one for Israel and one for the church. As well say there are three as to say there are two.

God says the three will become one. Egypt, Assyria and Israel are one in the kingdom of God. This is directly opposed to the dispensational posit of two separate kingdoms. We may as well charge Isaiah with replacement theology. He says “one church” not two salvations, one for Israel and one for the church.