Mary Mary, Quite Contrary, How Does Your Kingdom Garden Grow? 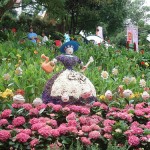 Mary, Mary, Quite Contrary, How Does Your Kingdom Garden Grow? No doubt, we all

remember at least parts of our

nursery rhymes from kindergarten and elementary school. I missed out on kindergarten by starting school a year early. Today, I understand that they make students wait an entire year if their 6th birthday falls after the school year begins.

So, what does nursury rhymes have to do with the kingdom? Well, it asks a very legitimate question. “How does your garden grow? It’s important to undertand principles of gardening when speaking about the kingdom. However, if one studies Dispensationalism and its teaching about the kingdom of God, a bit of confusion may result.

As a young child, I was fascinated with seeds. Though we lived in a rather small house with back yard with dirt packed so hard you could spark fire from a shovel, I was determined to plant a garden of some sort. So, after a rain, that softened the ground, I would plant some corn, watermelon, or bean seeds or whatever I could find just to watch how fascinating it was to see them grow.

In all my early days of “farming,” I never saw a plant pop out of the ground full grown with fruit that could be harvested the same day. It always started with a little shoot pushing up through the dirt, with the old seed body a part of it until it fell away while the little shoot continue to grow.

Well, I never got to see a harvest of those plants because either my dog, or my friends that I got into a fight with, or the scorching sun destroyed them because I forgot to water and cultivate them. I was only about eight or nine years old, had lived in the city all my life, so I had very little agricultural training (which is why I was experimenting in the first place.)

Most of my friends who had lived in the country didn’t want anything to do with planting anything. They had already had enough of that.

At any rate what does this have to do with the kingdom and Dispensationalism?

Mary Mary Quite Contrary, How Does Your Kingdom Garden Grow? – A Parable About the Kingdom

“And He said, the kingdom of God is as if a man should scatter seed on the ground, and should sleep by night and rise by day, and the seed should sprout and grow, he himself does not know how.

For the earth yields crops by itself; first the blade, then the head, after that the full grain in the head.

But when the grain ripens, immediately he puts in the sickle, because the harvest has come.” (Mark 4:26-29)

According to the Lord, the kingdom begins as a seed, sprouts and grows while the farmer goes through his routine of sleeping and rising over time completely unaware of how all this takes place.  As the kingdom seed progresses through various stages of development, it finally becomes full grown, which signals the time of the harvest.

Now we must ask, how does the kingdom garden of Rapture Ready Dispensationalism grow?  We’ll according to them, the kingdom has not yet arrived. In other words, no seed of the kingdom is growing now. But, at some alleged time in the future, they’re going to be raptured. Now a rapture of this sort is the equivalent of a harvest.

They expect to be taken out of the world, harvested. But this happens before the kingdom begins, before it even has time to grow while they sleep day and night which they’ve been doing for a couple hundred years now. Still no kingdom sprout anywhere. But they could be raptured or harvested any moment!!!  How does this grab you?

According to Christ, the tares and the kingdom seed are sown into the same field or world at the same time. Dispensationalism disputes this. They argue that they are harvested before the kingdom arrives. According to them, the millennium (Christ’s alleged future reign on earth) happens after they are harvested (raptured and jettisoned to heaven), leaving the tares (the wicked behind).

So we ask, how does this garden grow?  We have a harvest before the kingdom seed is planted. When the kingdom does arrive, it produces no good fruit, because only the wicked are left behind. This, inspite of the fact that Christ said the tares are gathered first and destroyed, leaving the righteous behind to shine as the sun in the kingdom.

Whatever Dispensationalism is, it is not according to the Bible. It’s teachings are so convoluted that not even the simple parables of Christ can describe it.  So maybe before Charting the End times, and laboring over the horns and hoofs, we should have farming 101 for all who want to understand how a kingdom garden grows.

Daniel’s prophecies are the source and background of all N.T.  kingdom prophecies. Learn more about Christ and his second presence with Daniels’s 70 Weeks, a study of the fulfillment of endtime prophecy. Study is complete with audio CD, PowerPoint and Q & A study guide.  Get yours today.

Click here to cancel reply.
« 2008 “Bible Prophecy” Singing the Blues?
Do We Have Spiritual Gifts Today? »