John the Baptist, An Eschatological Figure

John the Baptist in Prophecy 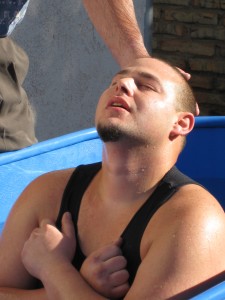 John, the Baptist plays an essential role in end times prophecy. His appearance on the scene marks the beginning of the last days. The setting of John’s arrival per Isaiah’s prophecy is is that of war, judgment and retribution, coupled with salvation. Isaiah wrote of comfort to Jerusalem saying her warfare is ended, and her iniquity is pardoned. She has received from the Lord’s hand double for all her sins. (Isa. 40:1-2).

This latter phrase is echoed in Revelation 18 with the fall of Mystery Babylon who receives “double” for her sins. The southern kingdom of Judah, like her northern sister Israel, was divorced by God for her idolatry. John’s role was that of a messenger sent to prepare the way of Christ by warning the rebellious nation to repent.

At a previous time in Judah’s history, she is said to be like unto Sodom and Gomorrah, (Isa. 1:9-10).  Again, in her last days in the NT, such designation is appropriate.

John the Baptist, as a captain in a military campaign was to make pathways through the obstacles. Israel’s hardness of hear is describe as a wilderness and desert filled with nothing but valley’s and mountains making the path to peace with God difficult. However, in so doing, all flesh (Jew and Gentile) would see the glory of the Lord.

This People Is Grass

The people were like dry grass withering in the heat of the desert, ready to ignite into engulfing flames at the slightest spark. At the time of this destruction and from within it, God would bring salvation. Peter quotes the text and applies it to the first century generation, 1 Pet. 1:24-25.

The Coming of the Lord

As Isaiah has introduced the Lord in the phrase behold your God, he cites the eschatological text quoted by Christ himself in the NT.

Behold, the Lord God shall come with a strong hand, and his arm shall rule for Him; Behold, His reward is with Him, and His work before Him. He will feed His flock like a shepherd; He will gather the lambs with his arm, and carry them in His bosom, and gently lead those who are with young. (Isa. 40:10-11).

Jesus quotes this text saying that he would come before some who stood in his very presence died. Compare Matthew’s account.

For the Son of Man will come in the glory of His Father with His angels, and then He will reward each according to is works, Assuredly, I say to you, there are some standing here who shall not taste death till they see the Son of man coming in His kingdom. (Matt. 16:27-28).

What is even more intriguing is that the vision of the transfiguration scene which occurred six days later, John, the Baptist, is mentioned as coming before the great and terrible day of the Lord. The vision of the transfiguration previewed Jesus’ parousia (second coming) according to 2 Peter 1:16. This is why the disciples asked Jesus why the scribes said “Elijah must come first”. (v. 10).

Jesus responds that Elijah had in fact already come, unknown and unrecognized by the Jews who had done to him whatever they wished (martyred John the Baptist). Jesus said he too would suffer a similar fate at their hands.

John’s Coming Signaled the End Was At Hand

Malachi spoke of John’s arrival on the scene in the last days. “For behold, the days is coming, burning like an oven, and all the proud, yes, all two do wickedly will be stubble. And the day which is coming shall burn them  up,” says the Lord of hosts, ‘That will leave them neither root nor branch…Behold, I will send you Elijah the prophet before the coming of the great and dreadful day of the Lord.” (Mal. 4:1-2, 5).

John the Baptist was sent because the day of the Lord was near. It would come to pass within a generation, during the time of those who stood in Christ’s presence on earth. The phrase, they shall not taste death until they see the Son of Man coming in his kingdom, means some who lived and stood with Christ would yet be alive when he returned. The phrase is identical to that made of Jesus’ birth regarding Simeon who would not die until he had seen the Messiah. (Luke 2:26-30).

Jesus quotes the text in Isaiah again in Revelation 22:12 saying “Behold, I come quickly”. John, the Baptizer had come, and the day of the Lord finally came upon the wicked nation of Judah. God also brought salvation to the remnant and the Gentiles who believed.

Tags: awesome day of the Lord, Elijah, John The Baptist, Malachi 4:5, Second Coming of Christ
« In This Mountain The Death Is Swallowed Up In Victory|Part 3
No More Tears From Bondage and Exile »