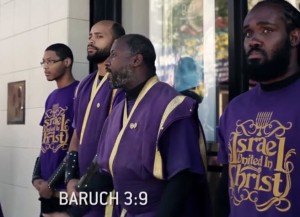 A few months ago, I was curious after hearing about a group that is called, Israel United For Christ or (IUIC). My aim was to learn more about them.

After delving into a few videos and speaking with some who were currently or formerly in what is known as the Hebrew Israelite community, I discovered there were various divisions of Black Hebrew Israelites.

Even today, I am not certain if the terms I use are accurate and I offer apology for my confusion. I do not intend to misrepresent them by name.

Some View Them As Disruptive

Often, organizations that are viewed as pro-African or “Black” in their ideals are considered extremists. For some reason, a small but significant element of those outside of of the African community have deep suspicions about the motives and intent of people of African origin.

When issues such as civil rights, Black Lives Matter, or any form of pro-Black initiatives surface, usually as a result of some form of oppression, those outside are quick to attach labels. As a person of African descent (my great grandfather was from Africa), we know that there are times when our education, socio-economic status, geographical location or political persuasion is over shadowed by our skin color.

Some years ago, I was working in my home based business, and pulled up to the house for my appointment off Elvis Presley Blvd in Memphis. Before I could get out of the car, a police car pulled along side of me and the officer began to shout at me asking me why I cut tried to cut him off during what must have been a car chase.

I replied in my total surprise with an expression to match, that I had no clue what he was talking about. He began to insist I had cut him off, until his buddy on the passenger side, looked at me and said, “that’s not him.”

In just a few seconds, I was on my way to possibly being one of the statistics we hear about so often in the news. That said, I do not have enough information about Israel United for Christ to categorize or characterize them as a radical group. Those I’ve seen are Bible-based and are often seen in public places teaching the Bible. Their method is different, but it’s what they do.

They also appear to have a well-organized hierarchical structure with disciplined behavior in their meetings. Their street methodology lacks sophistication but its their method and they’re not breaking any laws.

What concerns me most about their ideology, is their emphasis on a Bible text that allegedly explains why African people were enslaved, brought to the Americas and to Europe and are being oppressed to this day.

They believe all Black people are descendants of the Ancient Israelites or Hebrew people of the Bible. They also believe that according to Moses Law all Black people are under a curse of slavery. It’s even difficult for me to write those words as I find them utterly repugnant. The text they use as a proof -text is Deuteronomy 28:68 in particular, but they assert that beginning with verse 15 forward, the curses apply to African’s living in America whom they teach are direct descendants of Israel. I will return to respond to this claim but first, let me point out some positives.

They Are Effective In Influencing Many Who Listen To Them

Men, women and the youth are being influenced by them. They refer to themselves by name with the phrase “ben Israel” meaning sons of Israel. They are well versed in the Torah and Tanakh, i.e. the Old Testament, and teach it religiously. They have also influenced the youth to get off the streets, learn more about their history and are helping to erase some of the European mythology that has crept into Christianity. On their website, they have produced page with the following title addressing people of African descent.

YOUR OPPRESSION IS BIBLICAL WHY? AND WHAT’S THE SOLUTION???

They respond that the reason is a rejection of the knowledge of God, the oppression of Esau (Caucasion RACE) and a lack of leadership in the Black Community. Their solution to the end of oppression and divinely appointed slavery is first to:

The Irony and Contradiction of Their Efforts

Note above that they claim African Israelites are under a curse by divine appointment. They reason it is because of disobedience. In this, their claim mirrors that of Torah-keeping Jews [not to be confused with Zionists] who claim they were expelled from Palestine for breaking the Torah and are yet under the curse of God.

They cannot forcibly return to the land apart from the coming of the Messiah. Therefore, they remain in exile until such time as the Messiah comes to deliver them. The Hebrew Israelites and Israel United for Christ groups have the same dilemma. In one video they were preaching to women whom they deemed were insubordinate to Christ.

They proclaimed they would be judged at Christ’s return. Here is the point. If the Israel United For Christ organization believes and teaches they are under a divine appointment of slavery, like the Torah-keeping Jews, there is no way to extricate themselves from their system of works until Christ returns.

Thus, they will by divine appointment remain enslaved in their ideology. The possibility does exist they may not tolerate oppression from a practical point of view, but that would be a violation of their divine appointment. I can think of no system that could be a heinous and devilish in proportion for an oppressed people than in their belief that they are divinely appointed to such end.

They have adopted the ideology of their slave-masters who taught and abused the Bible with the curse of Ham and other master-slave dynamics of Scripture used to enforce slavery.

No Land, No Government, No King, No Kingdom

Another  contradiction of the IUIC organization is their claim to be a nation. There is no such thing as a nation without a land or Geo-physical territory. Where is their land? Where is IUIC located on the world map. According to their r website they have a few thousand members. Yes, they are growing,  but they have no land.

They are not in the strictest sense a nation. They have no centralized government to govern the land or the people. The only land that the Torah included was Palestine.

Today, the Zionists have control of that land. Do they seek to uproot the Zionist and the Palestinians and make their claim? Perhaps the Palestinians being people of color are included as one of their tribes. So, they will be sharing the land with Arabs.

How will they acquire this land. Perhaps they are waiting on Christ to come and give it to them as are the Torah-keeping Jews. What if Christ’s coming were future, and both claimed the land?

Finally, I would like to address the text of Deuteronomy 28. Yes, it describes curses in the Law of Moses. Yes, verse 68 speaks of Israelites being returned to Egypt in slave ships. Yes, Israelites were of African origin.

Josephus recorded that Israel was in fact returned to Egypt (Africa) in ships. It says not one word about Israel being returned to America in ships. Further, that this text is not about the transatlantic slave trade is evident. The text states “no man will buy you.” How can that be true of the enslavement of Africans 500 years ago?

Zionists financed the slave trade. They were the wealthy financiers of slave ships and of the insurance companies that insured the bodies of slaves. They sold slaves all over the world.

All Bible Prophecy Fulfilled in 70AD

Here is the most telling argument against the IUIC organization and all futurists. All Bible prophecy is already fulfilled. Christ’s returned almost over 1900 years ago in the first century. He promised to return within one generation, the same generation in which he lived.

He said, that generation would by no means pass away until all things, including his coming in the clouds was fulfilled. See Matthew 24:30-34. His coming marked the end of the Jewish age, (Matt. 24:3, 1 Cor. 10:11. If deliverance did not occur then, there is no deliverance and IUIC is doomed if they are like all futurists, waiting on a Savior from heaven to deliver them from oppression.

The Gospel Message Teachers Freedom From the Bondage of Torah

The law, i.e. Torah is no longer binding. It was fulfilled almost 2000 years ago. The gospel is a gospel of freedom. Salvation is not national in a political sense, but universal in a spiritual sense. Very specific texts teach that those who are in Christ are no longer under bondage, no longer under the law, no longer have a yoke of slavery around their necks and are free. The issue is why don’t they believe and teach it?

They believe they live in the Last Days. They advocate a yet future return of Christ. This is a misunderstanding of the Scriptures. The last days ended in 70AD. Today we live in the “age to come”, i.e. the kingdom age which follow the last days of the Jewish age. They’re paradigm is one of living in the past, preaching a past curse, wearing garments associated with a past covenant,  and following a covenant that is past.