Flesh and Blood Enters the Kingdom of God? 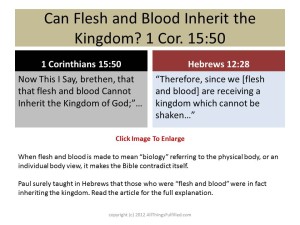 Flesh and Blood in the Kingdom?

How is this possible?

It is a blatant contradiction, if and only if, by “flesh and blood” in 1 Corinthians 15:50, we mean biological cells and DNA. However, that is not what is meant. But before we address that point, let us note that some were inheriting the kingdom.

Flesh and Blood Does in Fact Receive the Kingdom

In Hebrews 12:28, the Bible says, “For we receiving a kingdom which cannot be shaken, let us have grace whereby we may serve God acceptably with reverence and godly fear.”
Several points should be noted here.

In Luke 19:12, the Bible speaks of the nobleman’s son, who went into a far country to “receive” for himself a kingdom and to return. This is a parable taken from a real world example but which Christ applies to himself. In the parable the Bible clearly teaches that Christ, as did Archelaus, inherited the kingdom.

Thirdly, Abraham receives the inheritance. “By faith Abraham obeyed when he was called to go out to the place which he would receive as an inheritance….”(Heb. 11:8)

Fourthly, the saints who are receiving the kingdom, [an ongoing present action pointing to a consummation], are simultaneously inheriting the kingdom. But these saints are “flesh and blood” biologically speaking. Thus, when “flesh and blood” is made to refer to biology, it forces the Bible to teach the very opposite of 1 Corinthians 15, thereby making the texts contradict with a 180 degree spin!

Flesh and blood cannot inherit the kingdom of God, 1 Cor. 15:50. But flesh and blood was at that very time inheriting the kingdom, Hebrews 12:28. How does that work with the Individual Body at Death view (IBD) who take ‘flesh and blood’ in the Corinthians text to mean the physical body?

Flesh and Blood is Covenantal Terminology

To the contrary, not only is “flesh and blood” per Hebrews 12:28, used in the covenantal sense of receiving/inheriting/entering the kingdom of God, the saints begin receiving it in advance of the parousia or with a view to its arrival upon the shaken of the Old Covenant heaven and earth! This further identifies this transition as covenantal, spiritual and progressively consummating the eschatological event.

In like manner, we are certain that “flesh and blood” in 1 Corinthians 15:50 cannot be interpreted to mean biology, but must be understood in a soteriological context. For example, Paul writes in Romans 8:9, but you are not in the flesh if the Spirit of God dwells in you.

Jesus on Flesh and Blood in the Gospel of John

Jesus defines the term “flesh and blood” from a covenantal perspective. He says of those born of God that they are not born of flesh and blood.
“But as many as received Him to them He gave the right to become children of God, to those who believe in His name; who were born, not of blood, nor of the will of the flesh, nor of the will of man, but of God.” (John 1:12-13)

Therefore, Jesus is speaking of the resurrection and says plainly; those who believe in him are not born of the flesh, or of blood or of the will of man but are born of God. His words are to be understood in the light of his expanded discussion on this point with Nicodemus in John chapter 3.

“‘Most assuredly, I say to you, unless one is born again, he cannot see the kingdom of God.'” (John 3:3).  Nicodemus asked Jesus directly, how could he be born of “flesh and blood”, that is how could he enter the second time into his mother’s womb and be born? That is a flesh and blood birth, but it is not the birth Jesus had in mind.

This is evident from his statement where he says, Marvel not that I said to you [soi, singular meaning Nicodemus], that you [humas, plural] meaning the nation of Israel, must be born again. In light of these statements, how can one refer to believers as being in the flesh or being born of  “flesh and blood” in their covenantal relationship as sons of God?

Summary of Flesh and Blood Study

Further, from Jesus’ conversation with Nicodemus and the text in John 1:11-13, we have the same contextual setting for understanding the term “flesh and blood” as used in the above-mentioned texts. It is clearly a contrast between the life in the Old Covenant in contrast to that of the New Covenant.

When Jesus says he came to his own, [Israel] but his own received him not, he speaks of those under the Law. But, to those who received him and to whom he gave the authority to become sons of God ‘not by blood, or by flesh or by the will of man’ (human power & authority) he is contrasting life under the old covenant, i.e. “flesh and blood” with life under the new covenant being “born of the Spirit” for the terms “born of God, and born of the Spirit of equal.

This is the meaning of 1 Corinthians 15:50 otherwise, we have flagrant contradictions of the scriptures that says those who, biologically speaking were “flesh and blood” were in fact receiving or inheriting the kingdom. However, as we have shown by Christ’s own words that “flesh and blood” referred to those under the Old Covenant Law of Moses, it becomes clear that they as such, cannot inherit the kingdom of God.