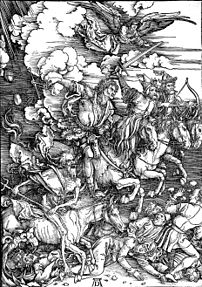 Eschatology: Study of the End Times

The first time I heard the world eschatology, I
thought, es-ka-what-ology? That was more
than two decades ago.

In this post, we’ll talk about Eschatology in
Bible Prophecy, Can We Understand It? But
first things first, and number one on the
agenda is a working definition.

Before we get to the “technical” issues, let
me share my journey with you, —briefly. I
learned this subject by simply reading the
text, particularly from Luke chapter 21:20–22.

Those verses literally changed my world on end times studies in more ways than this brief space allows. Suffice it to say, that the direction it pointed was 180 degrees away from where I was as an Amillennnialist.

However, I did make a few friends, and I literally mean a few. That followed making legions of enemies! It’s strange how a shift in your doctrinal position easily changes your “synagogue” address. But, it’s all good. Now, let’s delve into the study of eschatology.

By last things, we mean the Parousia (the presence of Christ), commonly known as the Second Coming, and it’s attendant events including judgment, resurrection of the dead, the establishment of the eternal kingdom and the end of the age.

This blog is primarily focused on providing an explanation of the end times. However, most people would be amazed of how much Bible territory that covers. It is woven in just about every doctrine and event in the Scriptures.

Now that we have a working eschatology definition, let’s look at the two major branches of eschatology studies.

Realized eschatology is currently the less popular of the two. It focuses on the endtimes events as having already occurred in the past. Other names by which it is called are, Preterism, Covenant Eschatology, Fulfilled Bible Prophecy, and Accomplished Salvation and more recently, Fulfilled Life.

Other terms used both disparagingly respectfully by those who oppose the realized posit are, AD 70 Theory and Hyper-Preterists or Full Preterism. The word preterist already means past. What is past is not future. To call it hyper-preterism is redundant. Hyper means excessive. Full is also redundant.

These terms are now merely accommodative in that they express the recent distinctions some attempt to make to distinguish preterism from anything which pertains to the future fulfillment. But, that is what makes it preterist!

How can anything already in the past, be any less or more in the past? It’s like being half pregnant or half dead. Have you attended anyone’s funeral who was half dead?

Another division of eschatological study, a more “lukewarm” position styled by its proponents as partial preterism, seeks to distinguish itself by taking most all endtimes passage in the past, applying them to the destruction of Jerusalem in AD 70.

However, texts which speak of the resurrection (an event concurrent with the Parousia, the eternal kingdom and judgment, (2 Tim. 4:1), [the end times events!] are held out to be future.

So, reader, if you are unfamiliar with any of this in what category would you place a concept that has half its marbles in its left hand and the other half in the right hand? Is that a left handed or right-handed marble holder? Is it partial left, or partial right?

In other words, if eschatology is about the fulfillment of all endtimes events, and if those events are not all fulfilled, then how is it past? Yet, we will acknowledge that view for what its advocates choose to call it, the partial preterit view.

Many of its proponents certainly have made invaluable contributions to the study of Preterism as a whole. The greatest challenge to that view is an inconsistent hermeneutic in determining where, when and why and which endtimes text to apply to Christ’s second coming.

Finally, the opposite end of the spectrum is that which holds all endtimes events to be future. Much of the last things taught today is futurist, including Partial Preterism, Amillennialism, Premillennialism, Dispensationalism and Historicism, and some Postmillennialism.

The study of last things properly belongs to the consummation of the Old Covenant. It could properly be styled as Jewish eschatology in the sense that it focuses on the end of the covenant given to Moses. Terms such as the last days and end of the age speak specifically of the final days of that covenant.

All futurist eschatology unfortunately focuses on the end of the Christian age, that is the age which does not end. By assigning the end to the wrong age, Jewish last things are translated to mean Christian last things. Thus, we have the major eschatological debate of the 21st century.

We cover these more in detail in the writings on this blog and in our future posts and study aids. See attached files to help in understanding the difference in the various views.