Are We Living In The Last Days?

How Can We Identify The Last Days With Certainty? 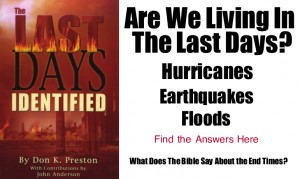 There are several Biblical landmarks that help us to identify the last days.

In order to answer the question of are we living in the end times, we need to examine those landmarks.

I will offer a few, and afterwards suggest a resource where they can be found with more complete details and comments.

The Coming of Elijah the Prophet

The Book of Malachi mentions that before the end would come, he would send the prophet Elijah. Many have understood that prophet to be Farad Muhammad.

However, there is controversy over the identity of this Elijah. The New Testament appears to identify a major character as Elijah. Yet, as one can see, a wide time variant exists between Elijah Muhammed and the narrative in the New Testament.

Page 61 of the The Last Days Identified offers a discussion on Elijah.

How does one close that gap? Are there contextual indicators that favor one over the other? What are the implications for focusing on the Bible evidence? How does a Judeo-Christian doctrine become a tenant of Israel?

How would such affect the faith of Jews and Christians? This is a dilemma that is addressed in the book, “Are We Living in the Last Days?” by Don K Preston, published by JaDon Books.

Are we not seeing before our very eyes the unfolding of apocalyptic events? Could the tornadoes of Oklahoma, Hurricane Sandy, or the Floods of Texas be signs that the nation is under judgment? That is certainly a possibility. Further, famines and earthquakes attend the last days.

Matthew 24 spells out very clearly the signs of the times that would precede the end of the age.  The abomination of desolation delineated in verse 15 is set within the temple cultus of Israel.  What impact on the last days prophecies are there in the current absence of the temple?  See page 61 of The Last Days Identified for a thorough explanation of this point.

The Great Apostasy In The Last Days

If there is one clear evident sign of the end times, it is the great falling away predicted in Matthew 24 and spoken of quite often with much attendant details by the prophets. In other words, there would be such a mass exiting of the church that it would be unmistakeably noticeable.

Paul, James, Peter, Jude and John all record evidence of this apostasy.

The Last Days and Beyond – Survival of the Church

While many today have predicted the end or destruction of the church, it seems apparent that the church or kingdom would survive the onslaught of the end time. Of recent questions have surfaced on the perpetuity of the church. Pages 124 and following engage this discussion for the thoughtful reader. I would highly recommend a fresh reading of the The Last Days Identified by those who are confused and troubled about the last days.

This book clearly answers the question, Are We Living in the Last Days? 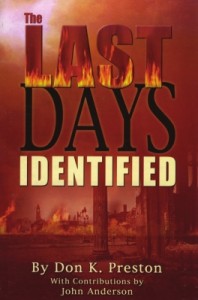