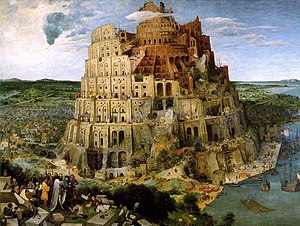 Hundreds of thousands of the most devout men of Israel met to celebrate the a Jewish festival of Pentecost as required by the Law given to Moses. Attendees were Jews from a variety of nations. Among them were Jews from Iraq and Asia Minor (Turkey).  Arab, Egyptian, African and Babylonian Jews met in Jerusalem at Pentecost for at a huge gathering. While there, they were addressed by a small delegation and an unexpected guest who’s appearance  fulfilled a major Bible prophecy, (Joel 2:28-32; Acts 2:16-20).

Earlier in the formulative history of Israel, God made an unexpected appearance to a gathering of nations who had united to build for themselves a tower to heaven. God purposely went down after seeing that the people all spoke one language. He then confounded their speech so that they could not understand one another. As a result, they separated from each other joined only by those who spoke a common language and were dispersed throughout the earth. They ceased building the tower as a result.

Following this event, God began to call out a new people  from Ur of the Chaldees, (Babylon or modern day Iraq), through Abram,(Abraham) promising to make of him a great nation. That event was the tower of Babel. Men wanted to build a “local” earthly tower to heaven. The new people began with God’s call to Abram. See Genesis 11-12:1-3.

The promise to build the great nation narrowed down through Abraham’s descendants through the line of Isaac, Abraham’s second son, born by his once barren wife Sarah. Yet, in a symbolical or figurative act, God commanded Abraham to kill Isaac, thus further cutting off fleshly ties to Abraham’s blood line. (See Gen. 25:1-12; Heb. 11:17-19). Rather, it was through Isaac’s Seed (singular, not plural) that God would make of Abraham a great nation, but not until that “Seed” was put to death, thus cutting his fleshly ties to Abraham’s blood line as demonstrated in the figure concerning Isaac. (See Galatians 3:16).

When the time arrived for God to fulfill his promise to bless Abraham through his Seed, the Divine Presence came down again from heaven to see what men were doing. Once again, they were seeking to build a tower of sorts in Babylon. However, this time, it was not so obvious to the world just where this “Mystery” Babylon was located. It no longer resided beyond the Euphrates in the land of the Chaldeans, but it’s identity and location was coded in Revelation 11:8, 17:5; 18:2, 10, 20-24.

On the day of that gathering, God confounded the people, but this time, only long enough to get them together in a peaceful assembly. They all heard in their own language, the twelve delegates who spoke on His behalf. Instead of confusion, they understood the message clearly even though they came from several nations. On that day about 3,000 of them repented for having participated in the capital murder of the Seed, whom God had promised through Abraham to bless the world.

Further, as in the case above, God called out a new people, through His Seed, i.e., those who would inherit the blessings of Abraham, (Gal. 3:28-29). For the rest who gathered on that day, many never learned that the Most High does not dwell in temples made by man’s hands. Much confusion resulted over the location of this latter tower of Babel.

Hart of the Matter – Riah Abu-el-Assal from Alan Hart on Vimeo.

In fact, God purposed to destroy the old temple and change the practice requiring men to go up three times a year for worship, (Acts 6:14).  However, many who worshiped in this temple resisted the word of God and even killed some of  his followers, sent by him to bless them with the message, Acts 7:53-60.  They continued building on that temple until God came down for the last time and destroyed it, burning it to the ground by a nation in whose mind God put his will that they might fulfill it, Luke 19:44; 21:20-22).

Yet, to this day the confusion continues. The unwise who do not understand are seeking to rebuild the temple of Babel. They believe God dwells in temples made by men’s hands. “Heaven is My throne, and earth is My footstool. What house will you build for Me? says the Lord, or what is the place of My rest? Has not my hand made all these things?” (Acts 7:49-50; Isaa. 66:1, 2).

The twelve delegates who spoke at the international summit at Pentecost, later explained that God’s new temple was the church, 1 Corinthians 3:16; 2 Corinthians 6:16-18). They explained that it was located in the Seed, not in the land. They realized they could not build a house for God any more than they could produce the Seed of promise. Rather, they chose to be a part of the building of God which rested on a sure foundation, (1 Corinthians 3:11.) Within the lifetime of the same generation who met at Pentecost, they proclaimed the following:

“Now, therefore, you are no longer strangers and foreigners, but fellow citizens with the saints and members of the household of God, having been built on the foundation of the apostles and prophets, Jesus Christ Himself being the chief cornerstone, in whom the whom the whole building, being fitted together, grows into a holy temple in the Lord in whom you also are being build together for a dwelling place for God in the Spirit.” (Ephesians 2:19-22).

In other words, God commenced the rebuilding of his temple in the first century before the old temple was destroyed. He built a temple which had Christ, –the Seed, the apostles and the Old Testament prophets as its foundation.  This temple is the dwelling place for God. That leaves no room for a temple rebuilt by man’s hands. To do so is to create another tower of Babel.

Hart of the Matter – Abd Albari Atwan from Alan Hart on Vimeo.

Peter wrote to many of  the same group of “Jews” who had gathered on Pentecost (1 Peter 1:1) saying they were “living stones” and were being built up a spiritual house, a holy priesthood to offer up spiritual sacrifices acceptable to God through Jesus Christ. They had no need for lambs, bulls, goats, turtle-doves or a red heifer. They knew they were the temple, built on the living stone that had been rejected by men, (Acts 4:11-12), but chosen by God, 1 Peter 2:4-6).

This stone was laid in Zion, the true Zion and began in the first century. The temple build upon that stone remains a top true Mt. Zion and is open to all who believe in Christ. For those who seek a tower, temple or Zion as a dwelling place for God or his people in any place other than Christ, are seeking to build a new tower of Babel that only confuses men and leads them to a path that may eventually lead to destruction.