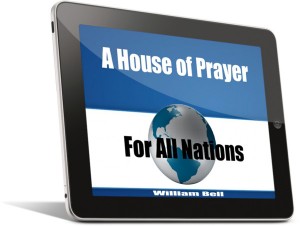 One might think that eschatology has nothing to do with the house of prayer, but that would be incorrect. We have established the relationship of the body of Christ, i.e. the Christian church as the hope of Israel (Col. 2:17; Eph. 1:13-14; 3:21) and the local church as having continued relevance in the present church age (Zech 4:1-2; Rev. 1:19).

This naturally leads us to ask questions about worship? Should we worship? Does worship and prayer have any relevance in the kingdom today? In prophecy, God spoke of the inclusive body of Christ as the house of prayer.

During the final week of Jesus’ ministry, he drove out those who sold in the temple. He quoted the text from Isaiah 56.

“Also the sons of the foreigner who join themselves to the Lord, to serve Him, and to love the name of the Lord, to be His servants–everyone who keeps from defiling the Sabbath, and holds fast My covenant–even them I will bring to My holy mountain, and make them joyful in My house of prayer. Their burnt offerings and their sacrifices will be accepted on My altar; for My house shall be called a house of prayer for all nations. The Lord God, who gathers the outcasts of Israel, says Yet I will gather to him Others besides those who are gathered to him. (Isaiah 56:6-8).

Eschatological Significance of the House of Prayer

As we stated above, Jesus uttered these words in the final days of his life. He was about to become one of the “outcasts” of Israel. He was rejected, despised of men and crucified outside the camp as a common criminal.

The chapter referenced by Christ is eschatological in nature. “Thus says the Lord: Keep justice, and do righteousness, for my salvation is about to come, and my righteousness to be revealed.” (Isa 56:1). This is a message of the coming kingdom of God. Isaiah foretells when the kingdom would be at hand. When the kingdom arrived it would bring a new message to the foreigner.

Josephus, describing the temple in Jerusalem offered these words of warning to the foreigner who would approach the house of prayer.

“When you go through these [first] cloisters, unto the second [court of the] temple, there was a partition made of stone all round, whose height was three cubits: its construction was very elegant; upon it stood pillars, at equal distances from one another, declaring the law of purity, some in Greek, and some in Roman letters, that “no foreigner should go within that sanctuary” for that second [court of the] temple was called “the Sanctuary,” and was ascended to by fourteen steps from the first court. Wars of the Jews, Book V, ch 5.

This means that Josephus, a Jew understood the inscription to bar those who were none Jews from entering the sanctuary of God.  These words mean that God had utterly separated foreigners, i.e. non-Israelites from his people for as long as the law stood.  The law prohibited Eunuchs and foreigners (Deut 23:1-3)

Foreigners in the House of Prayer

“Do not let the son of the foreigner Who has joined himself to the Lord speak, saying, The Lord has utterly separated me from His people;’ or let the eunuch say, Here I am, a dry tree.” For thus says the Lord; “to the eunuchs who keep My Sabbaths, and choose what please Me, and hold fast My covenant, Even to them I will give in My house and within My walls a place and a name better than that of sons and daughters; I will give them an everlasting name that shall not be cut off.

The name God would give to the eunuchs and foreigners would be better than that of sons and daughters. God’s house of prayer is none other than the kingdom, i.e. the body of Christ consummated in the last days and fulfilled in AD70. It is the holy mountain of Zion wherein all nations gather in the last days of the Jewish age to usher in the Christian age. God says the burnt offerings and sacrifices would be accepted on his alter in the new kingdom, i.e. the house of prayer.

House of Prayer to Include the Remnant of Israel and Others

When God gathered the outcasts of Israel from exile in the last days, he stated he would also gather “Others” besides those who are gathered to them. This too refers to the foreigners. One can now understand why the Eunuch was so excitedly rejoicing once he heard the gospel of Christ preached, (Acts 8:26-40). He knew that he was now allowed to enter the presence of God. He no longer would be viewed as a stranger or barred from the sanctuary of God.

Of the Gentiles, it was said, they were strangers and foreigners who were alienated from the commonwealth of Israel, but they were made nigh by the blood of Christ. “Now, therefore, you are no longer strangers and foreigners, but fellow citizens with the saints and members of the household of God. They not only could enter the new sanctuary, they were  part of it (Eph. 2:11-22). The household of God is none other than the house of prayer.

Zechariah Prophesies of the House of Prayer

Some have tried and succeeded in dissuading men, women and children to believe in the church and in prayer. They reason that prayer belonged to the pre-parousia reign of Christ. However, after AD70, they have no further use for prayer in their paradigm. The house of prayer has no meaning in their world of thinking.