Who Came Out of the Great Tribulation? 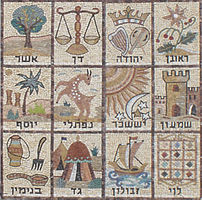 Mosaic of the 12 Tribes of Israel

Often people ask, who are those
who came out of the great tribulation?

This is a great question and is usually
offered as proof that both the book of
Revelation and the great tribulation is
future.

It rather becomes and explosive keg
of gun power that explodes in the face
of the futurist.

proof positive that the event belongs to only one time period in history. Who Are These Who Come Out of the Great Tribulation?

“Then one of the elders answered saying to me,” Who are these arrayed in white robes, and where did they come from?”

And I said to him, “Sir, you know.” So he said to me, “These are the ones who come out of the great tribulation, and washed their robes and made them white in the blood of the Lamb.

Therefore, they are before the throne of God, and serve Him day and night in His temple. And he who is on the throne will dwell among them. (Rev. 7:13–15)

In Revelation chapter 7, we have a vision of the sealing of the 144,000 of the tribes of Israel, (vv. 3–8). Following this is the number which no man could number who stand before the throne of God with palm branches in their hands, (v. 9).

When an inquiry is made concerning their where they come from, it is said that they had come out of the great tribulation and had washed their robes and made them white in the blood of the Lamb.

This enabled and entitled them to stand before the throne of God, where they served him day and night in his temple.

Dispensationalists Claim Revelation and The Great Tribulation is Future

In order to make a case for themselves, Premillennial Dispensationalists claim the Book of Revelation is yet unfulfilled. Likewise they see the great tribulation mentioned in chapter 7:14, as a future event.

They continually make the blunder of reading 21st century ideas into these first century prophetic texts. In perusing a blog last night, I ran across the statements which said the apostles prophesied that the end time events were “yet future to us,” meaning 21st century Christians.

Consider whether you have read any last days coming of the Lord prophecy which uses that language. For example, compare the statements:

This is the manner in which Bible texts must be reworded in the mind and system of the Premillennial Dispensationalist to wring out a future coming from these passages.

However, the passage above in Revelation puts that theory to rest.

Only Firstfruit Saints Came Out of the Great Tribulation

The firstfruits is a concept from the Jewish harvest festivals. In Levticus 23, it refers to the first harvested grain. The Barley harvest was first, and the priest waved a sheaf of the first ripe grain.

About 50 days later on Pentecost, the a second portion of firstfruits were taken at the beginning of the wheat harvest. This identifies two portions of first fruits.

Exodus 23:19, acknowledges the concept of the first of the firstfruits as signified at the beginning of the Barley harvest which corresponded in time with the Jewish Passover festival.

Christ, corresponds to the first of the firstfruits. There can be no other as Christ is the beginning. Likewise, those who form the second portion of the firstfruits began on Pentecost (Acts 2) just as in the agricultural typology.

Of His own will He brought us forth by the world of truth, that we might be a kind of firstfruits of His creatures. (James 1:18)

Further, firstfruits Christians in the first century, were given the firstfruits of the Spirit, as the pledge of their inheritance, i.e. miraculous gifts, (Romans 8:23; Eph. 1:13, 14).

John, in Revelation 14:1–5, shows that in addition to the innumerable company of chapter 7, i.e. the number which no man could number, the one hundred and forty-four thousand likewise stood before the throne of God.

They are called the firstfruits!:

And in their mouth was found no deceit, for they are without fault before the throne of God. (Rev. 14:4, 5)

For more information, see “The Great Tribulation Past or Future?” Also, learn more about the Lord’s first century return. Pick up your copy of our book, The Re-Examination. Order today over our secure server.