What is Zionism and Who Is Anti Semitic? – A Three-Sided Coin 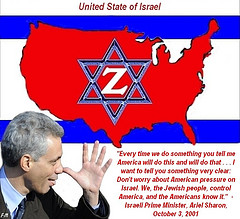 Gog and Magog Deceives the Nations

Acclaimed reporter and former Vietnam correspondent, Alan Hart, is the author of “Zionism The Real Enemy of the Jews, Volume One: The False Messiah. In the prologue  titled “Waiting for the Apocalypse, p. 26, he cites staff writer Jane Lampman’s report in (Monitorworld, March 6-12, 2004).

Her report headlined: THE END OF THE WORLD: THE DEBATE HEATS UP.  She wrote that “the interest in end-times prophecy has spread beyond their circles and is not only shaping people’s lives, but even influencing United States foreign policy. She referred to the minority of fundamentalist American Christians.

(CUFI) Christians United for Israel, lobbyist John Hagee‘s video “Countdown to the Final End” lists his 10 reasons for believing that our generation will see the end of the world, even if it means a nuclear holocaust between the state of Israel and the Arab world. According to the back cover of his book, Jerusalem Countdown, such a catastrophe “will affect every person on planet earth.”

Many Christians, religious and non-Zionist Jews fear being labeled “anti-Semitic” for speaking out against the Zionist movement, even while knowing clearly that ethical and moral Judaism is worlds apart from the political agenda of “Zionism.”

A most peculiar anomaly is the marriage styled “Christian Zionism” as advocated by Hagee.  Now, everyone who understands and accepts the Bible is a Zionist in some fashion, including this writer. The issue is we all mean something different by that word.

There are religious Judaic Zionists who practice the Zionism of the Old Testament. There are “Christian Zionists” who support the modern political state of Israel which opposes religious Judaism (See Jews United Against Zionism), as a non-political state.  The Zionists’ agenda is focused on a future world dominated and ruled by their movement.

“Christian Zionists,” as the term is popularly used today are those who see the end times prophecies of both Old and New Testaments as imminent in bringing about this world-ending change.  They are mainly preoccupied with geographical territory, political power and nuclear holocausts of the Arab world. This is not a new issue, but the same national (now international) blindness that existed in the time of Christ. This debate was settled long before it ever got to its earth threatening stage we see it as today.

On the other hand, there are Christ-centered Zionists who understand that true Zionism has nothing whatsoever to do with territorial land borders, national politics and nuclear warheads. Jesus told the Samaritan woman that the time would come that neither in Mt. Gerizim (in Samaria or Northern Israel), nor in Jerusalem (Judea) would men worship the Father. (John 4:20-24).

Christ Labeled “Anti-Semitic by Political Zionists of His Day

The political Zionist leaders of Christ’s day decided this Palestinian leader was too much of a threat for their nationalist regime. Their “cloak of righteousness” was unveiled by the hypocrisy revealed in their true politically motivated machinations. “Then the chief priests and the Pharisees gathered a council and said, ‘What shall we do? For this Man works many signs. If we let Him alone like this, everyone will come and take away both our place and our nation.'” (John 11:47-48).

However, the political agenda of those who rejected Christ’s teaching ignored his message that God’s mountain no longer resided in Palestine, but in the Father himself, and is spiritual. This message so aggravated the Jews (political and national Zionists of Jesus’ day) that they labeled him “anti-Semitic,” and crucified the one Palestinian whom Pilate named “KING OF THE JEWS!”

Why this Anti-Semitic charge against Christ?  He refused to be the “Prime Minister” of their political machine. They wanted a “king like all the nations” to rule in the land as had David in the past. This in spite of the fact that God Himself said from the very beginning that such a king was a sign of rebellion against Him (1 Samuel 8:3f; 10: 19; 12: 17f). They even held a convention and attempted to take him by force to create a new political Zionist state.  Christ refused that offer just as he had earlier rejected Satan’s offer of political world domination (John 6:15, Matthew 4:8-11).

Disappointed and desperate that their attempts failed, the congress of political Zionists held a secret council meeting.  At that meeting they labeled Christ as an insurrectionist and enemy of the Jewish state (Luke 23:1-4), maintaining the charge despite his sworn testimony under oath before Pilate that His kingdom was not of this world (John 18:36), i.e. not located in Palestine, as he affirmed to the Samaritan woman per above.

Humiliation and Persecution of Christ and His Palestinian Followers

He then became a condemned political prisoner, and suffered the humiliation of an illegal mock trial in which he received a death sentence. Following this, the (High Priest, or president of the council) declared a war on terror, seeking to ethnically cleanse the nation of his disciples and chased them out of the land, (Acts 4-8:1). That’s quite a charge against a man who taught his disciples to “turn the other cheek” and refused to let them carry swords (hi-tech artillery of his day).

Christ was an advocate of true Zionism. It was neither Judaic (as noted above), like those who crucified him nor political and non-Judaic as that today.* But,* a Zionist He was and is. He would rule in Zion (Psalm. 110:2). To this very day his throne sits upon the top of Mt. Zion, God’s holy hill, (Psalm 2:6)

Again in his prologue, Hart writes the following in an attempt to define true Zionism. “For those readers who are not intimately familiar with the terminology of the conflict I should point out that the Zion of spiritual Zionism is Mount Zion in Jerusalem.” (Zionism The Real Enemy of the Jews, The False Messiah, p.  28). He contrasted current political Zionism from Judaic Zionism.

It should be clear from Christ’s words and actions noted above, that he did not advocate a Zionism rooted in the mountain or territory of Israel in any form or fashion. Yet, he rules in Zion.

True Zionism In The New Testament

Three books of the New Testament clearly delineate between true Zionism and political or Judaic Zionism. The first is Galatians.
In chapter 4:24-27, Paul speaks of:

Political or National Zionism Versus True Zionism in Galatians

Note that the bondwoman symbolically representing national Israel, was “cast out” (v. 30), that she and her son might not inherit with the freewoman. This means the Zionism of Old Covenant Judaism is not a part of true spiritual, heavenly Zionism.

Political or National Zionism Versus True Zionism in Hebrews

The next example is found in Hebrews 12:18-23, where the writer contrasts the Mountain in Sinai where the Old Covenant was given (to be compared with Galatians 4:25), and Mt. Zion, the heavenly city of Jerusalem, where Christ is king.  Note that Zion in the text is called the city of the living God and the church,* (ekklesia), of Christ, in contrast to the political state of Israel situated in Palestine.

The last example in Revelation where the old city of Jerusalem which convicted Christ of “anti-Semitism” and crucified him on a cross outside the gates is called the “great city” (Revelation 11:8), and is once again spiritually styled as Egypt, implying bondage.

The descriptive phrase, “where also our Lord was crucified” identifies the city as Jerusalem. It could not be that a prophet perish outside of Jerusalem, (Luke 13:33).  That same “great city” is burned by the Romans (Revelation 17:16-17; Luke 21:20-22), the very ally they feigned a treaty with (“we have no king but Caesar”) to wage their “war on terror” against the true Zionists, i.e. Christ and the church.

What Is Zionism and Who is Anti-Semitic? – A Three-Sided Coin

Remember 70 A.D. – The Day of Reckoning for Ethnic Cleansing

It was a very sad day in Israel, when “ethnic cleansing” came home to roost. The Roman invasion of Judea which destroyed the temple and political state of Israel in A.D. 70,* was Christ’s final answer to the High Priest (Matthew 26:64).  Christ had no desire to reign in literal Jerusalem over a political regime. He sits upon the throne and reigns from Mount Zion in the heavens at the right hand of God. His scepter is a scepter of righteousness. His kingdom is neither anti-Semitic, anti-Arab, nor anti-Christian welcoming all who follow righteousness to dwell with him on true Zion’s holy hill.