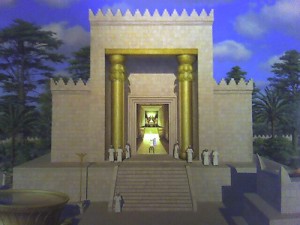 The Temple - Glory of the Past

The Glory Was Not Revealed continues our study on What Body Did the Apostles See? Part II asked a second question, i.e. When was Christ glorified?

“The elders who are among you I exhort, I who am a fellow elder and a witness of the sufferings of Christ and also a partaker of the glory that will be revealed.” (is about to be revealed, -mellouses apokaluptesthai). Why was this so? It is because the glory of Christ which would be revealed was the glory of the Father. “For the Son of Man will come in the glory of

His Father with His angels, and then He will reward each according to his works.” Matthew 16:27)

John is even more emphatic in his denial that they had handled Jesus’ glorified body.” Beloved, now we are children of God; and it has not yet been revealed what we shall be, but we know that when He is revealed, we shall be like Him, for we shall see Him as He is. (1 John 3:2)

Does not this verse clearly state that the apostles who handled, touched, heard, ate and spoke with Christ had not yet seen his glorified body? If Jesus’ post resurrection body was the incorruptible body of which ours is to be fashioned as in the futurist or other individual paradigms, then the apostles have lied to us. Why do we say this? It is because they not only saw that body but they touched and heard an incorruptible, glorified, immortal body but flatly denied it in their writings!

This shows they were not speaking of Jesus’ post resurrection body as the body which would be revealed. They were speaking of his body of glory associated with his coronation.

The Body of Glory Was Their Hope

In addition, John says it was their hope to be “like” Him, for we shall see Him as He is. “Shall see” expresses a future time and an object of hope stated in verse 3.

“And everyone who has this hope in Him purifies himself, just as He is pure.” Further, Paul tells us that ‘hope that is seen is not hope, for why does one hope for what he sees? (Rom. 8:24-25)

Understand that the apostles did not yet have their glorified bodies when they wrote. Also know that they disavowed any knowledge of what his glorified body was like. Whatever that likeness was, it was what they also desired to be. Since they were already like Christ in his human body for he was made in their likeness, they were not hoping to have a body like Christ’s post resurrection body as the object of their eschatological hope.

The Body of Glory Was Hidden

Now it is acknowledged that the glory which the disciples would experience with Christ was yet future when Paul wrote Romans 8:17-21, and it is the glory of the resurrection per Rom. 8:23. Thus it is equal to the glorious body of 1 Cor. 15.

Since that glory had not been revealed and equals the glory of Christ’s resurrection, then it cannot be the likeness of his post resurrection body for the reasons above.

Now, if Christ does not enter into his glory until his ascension and coronation, and if the body handled by the disciples cannot for reasons above be the “body of His glory,” i.e. the immortal, incorruptible body of the eschatological end time goal, then it follows that Christ’s glorious body into which ours conforms is not that of his biological pre or post resurrection body. Christ’s spiritual body, the church is the body of glory and the glory which was revealed. See our study on  the Reexamination for more information on Christ’s body of glory.