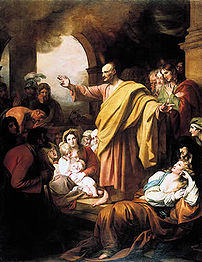 Most of the lessons I grew up hearing about giving were sermons on Proverbs 3:9–10 about the firstfruits. Never would I have asked “What Do the Firstfruits
of the Spirit Have to Do With Eschatology?” At that time, I had no clue about the richness of the teachings of the firstfruit imagery in Scripture.

We were taught not to spend our money until we first gave a portion back to God. The concept of giving God the best and the first fruits offerings begins with Abel and Cain, (Gen. 4:3, 4).

The term comes from aparche, an adjective in the Greek meaning “first” which modifies the particular product concerned. It is from a root protogenema, which means “to bear early, new fruit” (Zondervan Pictorial Bible Encyclopedia, Vol II, p. 541, 1980.

Thus, in the time of harvest, aparche is the “early fruit,” the first ripe of the fruit, or grain. When speaking of children in a family, it is the first child separated from the mother’s womb or the firstborn. See Genesis. 49:3 and Exodus 13:1

Who Are The Firstfruits?

This definition plays a very critical role in eschatology. Whenever we see the word used of Christians, it always means the first Christians, i.e. those who lived in the first century.

No other Christians could be the first “born again” Christians besides those who were born again beginning on the day of Pentecost, per Acts 2 and in that first century generation. Hence, the Apostle Peter refers to the events of that day as the “beginning” as far as the church is concerned. (Acts 11:15).

James writes, “Of his own will he brought us forth that we should be a kind of firstfruits of his creatures,” (Jas. 1:18). He was not writing about twenty first century believers. Rather, those words apply exclusively and especially to the first century generation.

Understanding this is a critical key in unlocking the meaning of many otherwise obscure texts in the Bible, especially in the area of the end time, which Peter speaking of Paul’s writings says that some things are hard to understand. (2 Peter 3:16).

The Feast of the Firstfruits

To get a better grasp of the particular significance of this group as it relates to harvest, check out Leviticus 23:10. When Israel came into the land God would give them, at the time of reaping the harvest, they were to bring the firstfruits to the priest.

This harvest is the barley harvest, at the time of the Passover feast of unleavened bread. It more literally is the “first of the firstfruits.” See that concept in Exodus 23:19. Next, following the Passover feast some 50 days later, they were to count 7 weeks of sevens or sabbaths, (49 days).

On the morrow after that 49th day, brought them to the fiftieth day or Pentecost, (the feast of weeks). At this time, (during the wheat harvest) they were instructed to bring a second portion of the early ripe grain.

Thus, this marks the second portion of firstripe fruit. The first was at Passover, the second at Pentecost. In the New Testament, this corresponds with Christ whose crufixion took place at the time of the Passover from which he became the firstborn from the dead.

On Pentecost 50 days later, the church began with the first “born again” Christians.  Hence James, and other apostles speak of the them as a “kind of firstfruits,” (Jas. 1:18)

The term is also used of those in the book of Revelation. This is a backhand slap to the Rapture Ready crowd and to any who would interpret the Apocalypse in a present day contemporary setting attempting force on that prophesy, a twenty first century interpretation and application.

The problem with doing that contradicts the whole idea and concept of the firstfruits! Contrary to Jehovah’s Witnesses and Rapture enthusiasts, the 144,000 of Revelation chapter seven and those who stand before the throne in the vision’s imagery are the first fruits of Zion.

In Hebrews, Paul spoke of those living in his day who had come to Mt. Zion, calling them the church of the firstborn ones, Heb. 12:22, 23. That makes them identical to those in Revelation. Note the innumerable company per Hebrews 12:22.

Then I looked, and behold, a Lamb standing on Mount Zion, and with Him one hundred and forty-four thousand, having His Father’s name written on their foreheads.”

That generation would not pass until all things took place! That included the great tribulation. It is past not future and belongs to the historical time frame of the firstborn Christians.

Those who espouse the Rapture doctrine cannot count. Yet they are always attempting complex mathematical computations from scripture in an attempt to set a date for Christ’s return and other end time events. All one needs to know if they want to get their eschatology correct is how to count to one.

Firstfruits equal one, as in the first century generation. Rapture ready advocates count to twenty one, and want to place Christ’s coming and the 144,000 in the 21st century. So do all other futurists. The firstfruits concept kills that idea.

They all should go back to pre-school or watch the Count on Sesame Street and learn how to place the first Christians in the first century for they are the firstborn ones in Christ. Failure to do so with eschatology results in a gross mathematical computation! They get their math and eschatology wrong.

One simply cannot take the message of the firstfruits and apply it to any other generation to make them first. In a family of 12 children, the last born child is not the first, no matter how one counts, twists, charts out the endtime, writes left behind best sellers, or shouts from a pulpit that he loves Israel. It’s really dumb stuff!

Now to our final question.

Well, pretty much the same thing. The firstfruits of the Spirit refer to the “When Did Miracles Cease?” Miraculous gifts poured out on Pentecost at the beginning (Acts 11:15) and which were given to the first century Christians.

Again, the answer is one as in the first one. Now you know why the Rapture Ready people do not like Preterists or realized eschatologists.

They don’t like us and what we teach very much because we can count to one quite well. That’s what the firstfruits have to do with eschatology. It shows that the end times message belongs to the first century, the only century that we could ever have firstborn Christians.

Learn more about this topic in our a new audio teaching on the firstfruit. It will greatly aid your understanding of eschatology and the problems of futurist endtime theories.