What Are the Gifts Without Repentance? 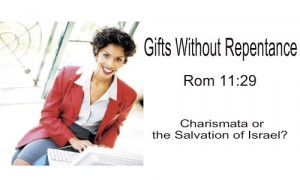 What are the gifts without repentance in Romans 11:29? In an attempt to find passages that support an ongoing charismata, i.e. spiritual gifts in operation beyond 70AD, Romans 11:17 is cited to show that God would never end spiritual gifts until we arrived in heaven.

However, the statement has to be taken in context. It appears to be a reference to Numbers 23:19-20:

These words were spoken by Balaam whom Balak commanded to curse Israel during their wilderness journey. Balaam refused as noted above.

However, it is said that the text in Romans 11:29 speaks of miraculous gifts. The text is offered as proof that they yet exist in the church today. Is this so?

Are Miraculous Gifts Without Repentance?

In reply, we suggest that miraculous gifts are not the gifts without repentance in the  context of Romans 11, but rather, the salavation of Israel.  The statement goes all the way back to the beginning of chapter 11 as a response to the question: “I say then, has God cast away His people? It is a continuation of the answer: “God has not cast away His people whom He foreknew, i.e. he did not renege on the grace promised to Israel.

God’s promise to Abraham was a promise to save Israel. As a nation they rebelled against God, crucified Christ and were at that time, persecuting the church. Do those facts negate the promise of God? The question does not focus on miracles which are no where in the context, but on the grace of God for salvation. The gifts without repentance refers to God’s promise to Abraham.

Grace is God’s gift of salvation in the context of Romans 11. Verses 26-27 says all Israel shall be saved when the Deliverer comes out of Zion and takes away their sins. Then we have the statement: “Concerning the gospel they [unbelieving Israel] are enemies for your sake, but concerning the election they are beloved for the sake of the fathers.

God would no more reject unbelieving Israel in fulfillment of his promise than he would have rejected them under Moses because of some who did not believe. In fact, God actually considered this, but Moses reminded him of his promise to Abraham.

The point was not that God would have reneged even according to Exodus 34, but that if Moses alone was all that was left of Israel, he would save Moses alone to fulfill the promise. What an awesome God! Yet, Moses interceded on behalf of the nation of sinners and persuaded God to turn his wrath from them.

To demonstrate that Paul speaks of salvation and not of charismatic gifts in this context is clear from the next verse. He uses  “For” or “gar” which is always used to explain what has gone before, to expand upon and clarify the previous thought.

Rememember, Paul has already made the point that God had not cast away Israel because he himself was an Israelite of tribe of Benjamin and seed of Abraham, (11:1).

As Paul wrote, God then was saving Israel “through the cross” not “through the law.” Thus many stumbled at that stumbling stone and “blindness in part” happened to Israel until the fullness of the Gentiles came in. In addition, he showed that the Gentiles were also grafted into Israel’s tree so that all believers constituting the new Israel would be saved. (Compare Rom. 9:6-8).

Hence, he explains: “For the gifts and calling of God are irrevocable”, —gifts without repentance” God did not revoke the promises made to Abraham, Isaac and Jacob that he would “bless all families of the earth through them” i.e. their “SEED” who is Christ.

As to the use of the term “gifts” Israel had received many “gifts” from God as enumerated in Rom. 9:4:

“Who are Israelites, to whom pertain the adoption, the glory, the covenants, the giving of the law, the service of God, the promises, etc.
Even though they did not have salvation “under the law” they surely had the promise of salvation “through the law.” And they were at a much greater advantage than those who were without the law (Rom. 3:1-2).

Now if it be objected to on the grounds that Paul here uses the plural form of gifts versus the singular as in Rom. 6:23 to refer to the gift of “eternal life” i.e. salvation I would suggest the following:

It could very well be that Paul is using a “figure of speech” where the plural is used when the singular is meant.

An example of this is Hebrews 9:23, which when speaking of the sacrifice of Christ, he uses the word “sacrifices” as though Christ offered more than one.

Thus, it is a Greek idiom determined by the context. Paul may be using gifts in the same manner in Rom. 11:29, as his only subject has been the “one” salvation of Israel.