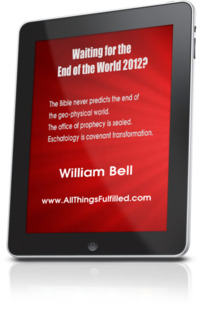 One would think that by now, people would get the message that such soothsaying about the end of the world is a profitable enterprise. Each end of the world campaign by a major end times “prophet” brings in millions of dollars. It also brings a lot of fear, grief and despair for those seeking to find strength for their faith.

Here are the top reasons why the end of the world 2012 predictions will fail just as those of 2011 did.

Why The End of the World 2012 Will Not Occur

Sure it seems bold to claim that the geo-physical world as we we know it will not end.  Are we privy to secret knowledge? No, we leave such egotistical claims to the futurists. The information at our disposal is available to all. However, God hid it in his word. The only way to find it is to read it. It’s just that simple.

Let’s check out a few promises where God emphatically states or implies the geo-physical world will never end. Jeremiah 31:35-37.

Thus says the Lord, who gives the sun for a light by day, the ordinances of the moon and the starts for a light by night, who disturbs the sea, and its waves roar (The Lord of hosts is His name): If those ordinances depart from before Me, says the Lord, Then the seed of Israel shall also cease from being a nation before Me forever.” Thus says the Lord: If heaven above can be measured, and the foundations of the earth searched out beneath, I will also cast off all the seed of Israel for all that they have done, says the Lord.”

God said if the ordinances of the sun and moon were to depart then Israel would cease from being a nation. First, let’s anticipate a dispensational argument. It is easy to take this text and argue for the continuation of national Israel. However, to do so ignores the context of verses 31-34, where God promised to make a “new covenant” with the houses of Israel and Judah, that is not according to the Old Covenant (Torah).

Thus, Israel would undergo a change from nationhood, territorial boundaries and temple rituals to the their new relationship with Christ under the New Covenant. It is for this reason that Paul could say God has not cast off his people, for Paul, who no longer served God through Torah, was an Israelite of the tribe of Benjamin and of the seed of Abraham, (Rom. 11:1ff). However, Paul renounced his national ties to Israel counting them as refuse (Phil. 3:7-8), that he might gain Christ.

The point is Christ, and Christ alone is the ONE SEED of Abraham who determines true Israel, (Gal. 3:16-29). Thus, true Israel are new covenant saints, (Jews and Gentiles) united in the one body of Christ. In that manner, God has not cast off Israel, saving believing Israel and Judah “in Christ” through the new covenant apart from Torah.

Now that we understand the SEED of Israel to be Christ who determines true Israel, we can see how important this verse is and how enduring is the promise of God. According to Psalm 89:34-35, God promises that the seed of David would endure forever and his throne would endure as the sun.

My covenant I will not break, nor alter the word that has gone out of My lips. Once I have sworn by My holiness; I will not lie to David: His seed shall endure forever, and his throne as the sun before me; It shall be established forever like the moon, even like the faithful witness in the sky.”

Those pedaling end of the world 2012 hype depend on the incredulity of the masses to read and properly discern the truth. Christ is here forever. His seed shall not cease, 1 John 2:17. The sun and moon are the geo-physical elements God used to make that promise. Therefore, they do not cease. Avoid the foolishness of end of the world 2012 hype and be settled in your faith and trust in God.

Stay tuned for our next installment on the End of the World 2012 where we talk about point 2 above. For more studies on the subject get our 5 DVD lessons with PowerPoint slides and a Bonus Audio on the Last Days.