Preterism is False, Is it True or False? 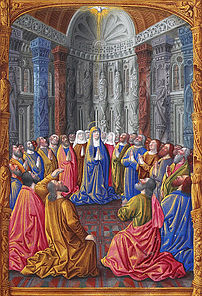 A few professors associated with Liberty
University are beginning to panic over
Preterism.

Preterism is False, Is it True or False?, is a
reply to objections raised by panicking
Dispensationalists. Preterism is a Latin
term which means past.

From the perspective of Bible prophecy,
it refers to all end times events as having
been fulfilled in the past. It is the opposite
of futurism, which holds those events to be yet to come in the future.

Dr. Edward Hinson, Assistant to the Chancellor at Liberty University

wrote an article entitled, The New Last Days Scoffers, as an attempted refutation of Preterism. The article appeared in the May 2005 issue of Jerry Falwell’s The National Liberty Journal. We offer a critique of that article.

Identifying the Last Days After a brief summary, Hinson cites 2 Pet. 3:4, (scoffers shall come in the last days) as a warning against Preterism. The problem Dispensationalism encounters is its inability to accurately identify the last days of the Bible.

Hebrews 1:2, tells us that the Lord spoke in the last days. Salvation was first spoken of by the Lord, then later confirmed with miracles by those who heard him, (Heb. 2:3).

But Christ did not live in the Christian age. In the fullness of the times (an equivalent expression of the last days), he was born of a woman, born under the law, (Gal. 4:4).

Thus, the last days and fullness of the times belong to the time of the Old Covenant, not the New. The Old Covenant, in its last days, and affirmed by the apostles as growing old and becoming obsolete (Heb. 8:13) drew near to vanishing at the time both Paul and Peter wrote.

Moses, prophesying to Israel of their last days, (Deut. 31:29), speaks of them as the perverse and crooked generation, (Deut. 32:5). Both Paul and Peter identified the generation of their day as the one Moses prophesied about, (Acts 2:40, Phil. 2:15).

Therefore, Israel was in their last days. Another challenge to Hinson’s assertion about the scoffers is that Jude identifies them as already present in the times of the Apostles.

“But you, beloved, remember the words which were spoken before by the apostles of our Lord Jesus Christ; how they told you that there would be mockers in the last time who would walk according to their own ungodly lusts. (Jude 17–18)

“These are sensual persons who cause divisions, not having the Spirit.”

Jude says these mockers were identified in his day as those who cause divisions. Dr. Hinson’s argument is anachronistic, an error in time. The language is present tense. Nor was it speaking proleptically (in the future), for their behavior is further noted by the phrase, “not having the Spirit.”

This separated them from the first century church who had received the “gifts of the Holy Spirit” beginning on Pentecost.

The Absurdity of the New Last Days Scoffers Charge

If the coming (parousia) spoken of in 2 Peter 3:4, would not arrive until a time future to us today, would not the scoffers have been correct in asking “Where is the promise of his coming?” Isn’t that the very question and position which Dr. Hinson raises as his objection?

Reader, please get this point. Note this illustration. If Dr. Hinson teaches a yet future coming today, and I “scoff” at that by denying it, that means I am scoffing against what is currently being taught, namely a yet future coming.

Now, consider: Jude writes that the mockers scoffed at the apostles teaching by asking “Where is the promise of his coming?” They could not be styled scoffers or mockers against the apostles if the apostles were not teaching the very opposite of what the scoffers mocked.

This means the apostles taught that Christ would return in the first century, hence the mockers asked, “Where is the promise?” If that is not the issue, then Peter and Jude should have given the scoffers the right hand of fellowship and said thank you for helping us teach against the Preterist view that Christ would soon come to destroy Jerusalem.

But if Peter and the other apostles taught that Christ would not return until centuries later, the scoffers would not be scoffers but believers!

Preterism is False, Is False? A Review of the First Epistle

In his charge against Preterism, Dr. Hinson omits that Peter directed his readers to his first epistle as a reminder of what he taught about Christ’s coming. By reading this, we will find why the scoffers were mocking against the coming Peter taught.

In other words, when you remind someone of what you previously said, you do not say something different, you repeat by restating what you’ve already told them. Peter’s second epistle and eschatology is the same as that found in his first epistle.

In chapter one, he told his readers that salvation was ready to be revealed. (1:5) He then cites the prophets as those who spoke of salvation which would be brought to “us,” i.e. first century saints, who had received the Holy Spirit, through those who had preached the gospel to them. (1:9–12).

Peter makes the point that his readers have the Holy Spirit. (See this point above for Jude’s hearers). Next, he tells that same audience, to hope to the end for the grace which would be brought to them at the revelation of Jesus Christ.

Thus, he told them to expect Christ’s return in their lifetime. In chapter 4, Peter expressly stated that God was ready (hetoimos) to judge the living and the dead.

Compare Paul’s statement in 2 Timothy 4:1, where he uses “mello” which means “about to”  in a similar statement, thus God was about to judge the living and the dead.

Peter adds emphasis in verse seven. “But the end of all things has drawn near.” Writing approximately AD 64 or later, Peter affirms that Christ’s coming to destroy Jerusalem had drawn near.

Thirdly, he states For the time of the judgment had come, 1 Peter 4:17. Now the mockers and scoffers resisted these words. They stoned Stephen to death for saying Christ would come and destroy unbelieving Israel and change the customs he gave Moses, (Acts 6:14).

So after almost a generation later, some 35 years, since Pentecost, the scoffers, feeling confident that the temple would not fall, that Christ was a false prophet, the apostles were liars, and hence Jesus would not come, mocked their teaching as they looked at what seemed to them, an impregnable temple.

They viewed as an impossibility that one who had been put to death would come again. Remember, even Jesus’ own disciples could not imagine the destruction of the temple with it’s massive stones, (Matt. 24:1–2).

With the background of the first epistle teaching the imminence of Christ’s parousia and coming in judgment, Peter reminds his readers in the second epistle of what he said in the first.

If the Apostle had spoken of a coming centuries later as Hinson affirms, Peter could have simply said “Amen” to the scoffers because they would have been in agreement.

In Will Planet Earth Be Destroyed? with a verse by verse interpretation of 2 Peter 3,  a thorough treatment is given of Peter’s teaching on the Scoffers, the end of heaven and earth, the coming new heaven and earth, and much, much more. This book is an outstanding contribution to the study of eschatology. Read this now