Mr. Carl Albert of Parkin, AR and William Bell of Memphis TN will engage in a two night public oral debate on the “Second Coming of Christ, Past or Future? 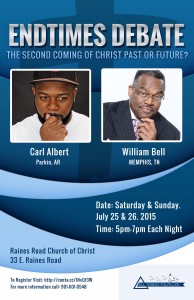 On July 25 and 26th, the two men will meet in a live discussion on the return of Christ. William Bell will affirm the Second Coming occurred in the past in connection with the Fall of Jerusalem in AD 70.

Mr. Albert will affirm the return of Christ is yet to come. The debate came about through a challenge from Mr. Albert after a conversation on a Google Hangout.

Mr. Albert is a member of the conscious community and has held several debates and classes on a variety of topics.

An announcement for the debate was published on several websites, social media pages, and in a local Memphis newspaper, the New TSD Memphis (Tri-State Defender), which has a growing audience both on and offline.

There will be three affirmative and negative speeches of equal length, 30, 20, and 10 minutes respectively each night.  DVD’s and Audio CD’s will be available shortly after the debate. They can be pre ordered below.