Karl Barth, Dogmatics in Outline, Is Christianity an Expectation of Hope? 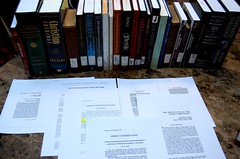 Karl Barth, theologian and scholar
fittingly wrote a latter chapter of
Dogmatics in Outline on the
“Coming of Jesus Christ the Judge.”

Karl Barth’s beliefs of Christ’s coming
as judge are futuristic. He however,
recognized the already but not yet
of eschatology.

Problems addressed in the book are the Christians view of time, which

he styles as “real time” versus God’s time.

In Karl Barth’s theology summary of present time, he saw Christ sitting at the right hand of God. This for him represented the present.  As such, the event occurred in real time. From this he concluded and rightly so that eternity had broken into real time.

His session at God’s right hand is not just the extract of this history; it is the eternal within this history. (p. 130).

However, in my opinion, it is a rather late disovery. For God, who is eternal in creating the world and time, broke into time, —real time with creation. Such has been the case from day one of Genesis.

Part of man’s “other worldliness focus” is a failure to grasp the significance of how eternity already exists in time. Therefore real time is that which includes both the temporal and the eternal, though God himself has neither begining nor ending.

The End Without An End

Karl Barth’s theory of the end without and end was to him frightful. It seems, if I understand him, that endlessness was an image of man’s lostness. “This ideal of endlessness has nothing to do at all with God,” (p. 131).  He then affirms that God’s time has an end.

Barth believed that offering the world the confident “hope” of Christianity was the hope of the world. However, history and the present proves that hope deferred makes the heart sick.

The alleged constant delay of hope has undermined belief in it. An ever-coming, but never-coming Jesus does not bring hope to the world, but despair, confusion and unbelief. Barth’s eschatology is that the time of the end is the end of time.

New Testament eschatology envisions a world without end. In fact, the kingdom is said to have no end, (Lk. 1:32–33). Like God, the kingdom has broken into the world. It is the throne upon which Jesus sits.

Ephesians describes the church as belonging to a world without end that God may be glorified for ever and ever, (Eph. 3:21). While man individually, does not exist eternally in this world, mankind will always be a part of it.

Karl Barth, Dogmatics in Outline, Is Christianity an Expectation of Hope?

Christ’s departed (made his exodus) from the world to go to the Father. This in essence effected his leaving the “world of time, though he did not leave man without the presence of the Holy Spirit (John 14–16).

In his second coming, he returned to the world of time, now to remain forever, without end. That is the realized hope of the world. If you enjoy reading the posts take a moment to bookmark the article using the icons below and or subscribe to our rss feed. Thanks in advance.