If Ham and Eggs Can Talk, Why Can’t the Stars in the Day of the Lord? 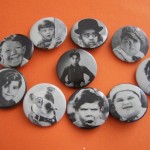 If I were you, I would be a bit curious of a title, If Ham and Eggs Can Talk, Why Can’t the Stars, in the Day of the Lord? Don’t you think it’s a rather
interesting eschatological theme? Well, here’s what provoked the title.

As a child I remember growing up watching the Little Rascals on TV, before going to school. On one episode, a Stymie persuaded whom I vaguely
remember might have been his friends to cook him some ham and eggs. He told him that ham and eggs could talk. Well, after a little persuasion and
determination, they fried some ham and eggs, and upon his disappointment of their utter speechlessness, left the meal on the table oozing with aroma
and flavor for Stymie’s hungry stomach.

When Stymie was confronted by his friends, saying, “I thought you said ‘ham and eggs could talk.’, Stymie replied as he chomped down the food, “These
ham and eggs are saying hello to my stomach righhhht now!

Well, that served up well as a bit of childhood humor, but the subject at hand is not to be considered humor. It is true. Yes, stars can talk. Oh, the proof you ask? Well, let’s see. In the beginning God made light on the first day of creation. Then on the fourth day, lights in the firmament of the heavens to divide the day from teh night. These were to be for signs and seasons, and for days and years.

God made two great lights to rule the day, and the lesser light to rule the night. He made the stars also. (Genesis 1:14-16).

The Luminaries As Signs and Symbols

In addition to their role as lights in the heavens to give light on the earth, these heavenly lights, particularly the sun and moon were to rule over the earth. The sun rules by day; the moon by night. Now, let us notice how these luminaries work as signs and symbols.

Joseph, one of Jacob‘s twelve sons dreamed a dream about the sun moon and the eleven stars coming to bow down before him, (Genesis 37::9). This was the second dream which incited the hate and envy of this brothers. In both dreams, they involved Joseph, the younger brother having authority or ruling over the older brothers, including his mother and Father.

Years later, after having been sold by his brothers into Egyptian slavery, serving an unjust prison sentence, Joseph attained favorable status in Egypt, rising to become second in command to Pharaoh. During the famine in the land which affected Canaan where his brothers lived, their father sent them to Egypt to buy grain. During this process, his brothers and family came and literally bowed down to him.

In his dream he saw them as the sun, moon and stars. This shows not only that stars could talk, but the sun and moon could also. But most importantly, these luminaries were used as signs and symbols representative of people.

If Ham and Eggs Can Talk, Why Can’t the Stars in the Day of the Lord?

With this understanding in mind, the prophets often spoke of the sun, moon and stars to represent authority figures, civil rulers, religious leaders and people. For example, in Isaiah 14:12, Lucifer, which means day star or morning star, is said to “fall from heaven.” Lucifer in the text refers to the king of Babylon who at the time, rule the world. Yet, his star crashed to the ground like all the other rulers around him. Though popular belief ascribes the term to Satan, there is no biblical justification for it.

In the previous chapter, Isaiah spoke of the sun, moon, and stars falling from heaven. These are not references to the literal heavenly lights that God created but to the civil  powers that God overthrew in judgment, (Isaiah 13:10). Likewise, Joel talks about the sun darkening, the  moon turning to blood and the stars falling from heave. This is simply a figurative description of the fall of a nation often used in apocalyptic or figurative imagery in the prophets. Christ and his apostles used the same language in the New Testament, (Matthew 24:29, Acts 2:20).

In Jude 12-13, he called attention to wandering stars, apostates who had departed from the faith. ” Speaking of them, they are called “spots in your love feasts,” “clouds without water,” “raging waves of the sea who foam up their own sham, and “wandering stars for whom is reserved the blackness of darkness forever.’ It’s a symbol of their judgment and the putting out of their light.

So, these as in the case of Joseph’s family, were “human stars.” And yes, they could definitely talk!  So, it’s important to understand how God uses poetic apocalyptic language in the Bible especially when speaking of the end times so that we do not attribute literal concepts to these figurative symbols. God never intended to destroy the luminary bodies in the heavens, and all eschatology which is focused on material cosmic destruction has gone awry. See (Genesis 8:22; Eccl. 1:4, Jeremiah 1:35-36).