If Christ Returned in 70 AD, What Happened to Satan? 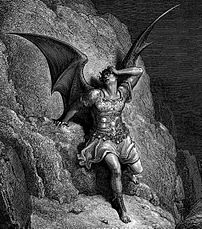 We’re often asked, if Christ has returned in
70 AD?, What happened to Satan This is a
great question.

Many want to know the whereabouts of the
Diabolos, the wicked one.

If there are two questions that plague the
minds of Christians they are:

“Where did Satan come from, where is he now,
and or where did he go? These are great
Bible questions.

Who wouldn’t want to know where their chief enemy was? No surprise visits

Man also came from God, but God is not responsible for what man makes of himself through his own choices. That, man will have to own up to.

“Truly, this only I have found: That God made man upright, but they have sought out many schemes.” (Eccl. 7:29)

Also, Whoever therefore wants to be a freind of the world makes himself an enemy of God. (Jas. 4:4)

Thus, the scriptures say that God has made man upright, but he (man) has sought out many ways to remake himself (good or bad).

In other words, man made choices that have consequences on who he is and becomes. Simple enough.

Likewise, God created Satan who also had choices about who he became. That God created all things is affirmed very clearly.

“All were made through Him, and without Him nothing was made that was made.” (John 1:3) Satan is a created being, made by God.

However, Satan also had a part in making himself. The scriptures state that he did not abide in the truth.

“He who sins is of the devil, for the devil has sinned from the begining. For this purpose the Son of God was manifested, that He might destroy the works of the devil.” (1 John 3:8).

The text is very precise in its statement. It says the devil has sinned “from” the beginning. The word “from” is a preposition translated from “apo” in the Greek, which means at a point a way from, a point of departure. Thus, at some time or point away from the beginning (creation), Satan sinned.

It was not a pre-creation event, but a post creation one. This compares with another text citing the activity of Satan.

“…He was a murderer from the beginning, and does not stand in the truth…” (John 8:44). John, therefore repeated the words of Christ concerning the origin of Satan’s evil.

All his activity is “from” i.e. at a point away from the beginning.

What caused Satan’s fall? Other texts suggest it was pride, 1 Tim. 3:7. Maybe he was power hungry.  Nevertheless the scriptures simply give us enough facts to understand that he was created by God and chose to become evil.

Now, let’s go to the other side of the question, the end.

If Christ Returned in 70 AD, What Happened to Satan?

It is clear to most Bible students that God planned the destruction of Satan very early in the scheme of redemption. ”And I will put enmity between you and the woman and between your seed and her Seed; He shall bruise your head and you shall bruise His heel.” (Gen. 3:15)

This is a prophecy which foretold the destruction of Satan. His head would be crushed by the “Seed” of the woman (i.e. by Christ), as a man crushes the head of a serpent to kill it.

Remember above, its states the Son of God was manifested that he might destroy the works of the devil, i.e. sin.

“Inasmuch then as the children have partaken of flesh and blood, He Himself likewise shared in the same that through death He might destroy him who had the power of death that is, the devil.” (Heb. 2:14)

Jesus prophesied the fall of Satan as swift as lightening from heaven, Lk. 10:18. During his ministry, he also taught that the judgment of the world was near, even using the word “now” to express the imminence.

In addition, to effect the complete demise of Satan, Christ would send the Holy Spirit in judgment.

Therefore, the judgment of Satan of necessity falls within the framework and scope of the first century work of the Holy Spirit.

For this reason, Paul writing in the late 50’s AD, saw the “crushing” of Satan as soon to take place.

It likewise is the time of judgment, (Joel 2:28–32; Acts 2:16–20). Therefore, the crushing of Satan would occur at Christ’s return, at the end of the Holy Spirit’s ministry, which clearly is 70 AD, historically date marked by the destruction of Jerusalem.

That means since Satan is yet to be destroyed at the time of the writing of Revelation, the book had have been written before 70 AD, before the fall of Jerusalem, and before Christ’s coming in judgment upon that nation.

Consequently, it also must be written before the destruction of Satan, and during the ministry of the Holy Spirit. This is all internal inspired evidence for the early date of the book.

Hence, Satan himself knew that his time was short.

“Therefore rejoice, O heavens and you who dwell in them? Woe to the inhabitants of the earth and of the sea! For the devil has come down to you, having great wrath, because he knows that he has a short time.” (Rev. 12:12)

This can only mean that the time was extremely short and soon to come for the defeat of Satan. Hence, John wrote of things which were shortly to come to pass because the time was near. (Rev. 1:1, 3)

At the coming of Christ, which ends the Holy Spirit’s ministry, Christ defeats Satan and casts him and his works, “sin and death” into the lake of fire.

“The devil who decieved them was cast into the lake of fire and brimstone where the beast and the false prophet are. And they will be tormented day and night forever.” (Rev. 20:10)

So, it’s time for many Christians to pay their last respects to Satan. They should stop blaming him for their sins, claiming that a “dead man” made them do it. Christ came to set you free from the bondage of Satan. He did, and a very good job at that!

Learn more about this and other endtime themes. Get your copy of the Re-Examination, A Study of the Second Coming of Christ in A.D. 70, by William Bell. To order over secure server, click here.