How Does Paul Use The Term “Body”? 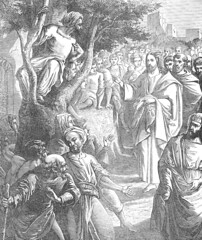 The study of the resurrection is one of
great interest and controversy. That
conflict derives from the question of
How does Paul use the term body?

For many, body in resurrection texts
is unquestionable. They take it to be
so obviously literal that an alternate
viewpoint is considered ridiculous.

The following points should help in our
understanding of the body from Paul’s
view point.

First, we must begin with the motif of

Christ’s departure from the world of Judaism. This is characterized as a second Exodus. Luke 9:312 speaks of his “decease,” which he would accomplish at Jerusalem.

How Does Paul Use the Term Body?

The word “decease” is translated from “exodus.” Therefore, Christ, in his death was making an exodus from the world he had entered into upon his birth. He was born of a woman, born under the law, (Gal. 4:4)

Secondly, Christ accomplishes for those who believe, an exodus from the world of Judaism. Why was this necessary? It is because Judaism was a subclass of being in Adam.

Now the result of being in Adam (corporately) was death through sin, ‘for as in Adam all die.’ 1 (Cor. 15:21). As a subclass of Adam, that condition passed down to those under the law.

Nevertheless, death reigned from Adam to Moses, even over those who had not sinned according to the likness of the transgression fo Adam who is a type of Him who was to come.” (Rom. 5:14)

Therefore, the need to deliver those in Adam/under Moses’ covenant summed up the mediatorial work of Christ as the Messiah and Savior.  This relationship under the law resulted in death in the body of sin.

Thirdly, Paul’s exodus motif forms the back drop of Romans, especially on his resurrection arguments. Note that God did not deliver an individual from the exodus but a colletive body of people called Israel.

For more on this collective concept, see “Contours of  Pauline Theology, by Tom Holland, pp. 85–110.

Fourthly, Paul writes that “our old man” was crucified with Christ “that the body of sin might be done away with that we should no longer be slaves of sin.” (Rom. 5:6)

The ‘body of sin’ is genitive case. To understand the expression in simple fashion is to render it as “sin’s body.” Thus, it is sin’s body that had to be destroyed that believers might be delivered from it.

The old man, i.e the sin body is crucified with Christ. It is tempting to translate this text to mean our individual bodies, but the collective is key to a proper understanding. “For he who has died has been freed from sin.” (Rom. 6:7)

The point is, it is not our individual bodies, let we attribute evil to the creation of flesh. Further, corruption is never applied in the Bible to the flesh of man, apart from what happens to it in death.

Besides, that would make for a pretty bad condition if Christ, in taking on the likeness of mankind in his humanity, took on a body of corruption. How then could it be said that Christ’s body saw no corruption, even in death!

Fifthly, it is through dying with Christ that the collective community of the saints, are freed from the “body of sin” and therefore from death.  That is the same death to which Christ died.

Sixthly, the saints were to ‘“reckon” themselves to be dead indeed to sin, but alive to God in Christ Jesus our Lord.”’ (Rom. 6:11). They were not yet made alive in Christ. This means they were not already perfected or had not attained to the full outworking of that new life.

Observe again in verse 6, the subjuntive case (expressing the future), “that the body of sin might be done away with, and “that we should serve.” See also Phil. 3:11, 12.

This is why Paul urges the church in the words, “Therefore do not let sin reign in your mortal body, that you should obey it in its lusts.” (Rom. 6:12).

Now why does Paul say “your body” versus “the body.” It is because it is only the body with respect to the church that it could be said not to allow sin to reign in your body.

If Paul had said, do not let sin reign in the body it would be an impossible goal, for not all in the ‘body of sin’ had died with Christ. Further, sin was already reigning in that body.

Thus, deliverance from the “body of sin” is equivalent to deliverance from Adam and Moses (the Law). “For sin shall not have dominion over you, for you are not under the law but under grace.” (Rom. 6:14)

Therefore, Paul is using the body in this context, not to refer to deliverance from human flesh, a gnostic concept) but as the soteriological change from the law of sin and death, to the body of righteousness in Christ.

Looking for a simple easy to understand source on the last things, resurrection of the body and coming of Christ? Get a copy of the Re-Examination by William Bell. Click here to order today.