Every Eye Will See Him Revelation 1:7

Every Eye Will See Him 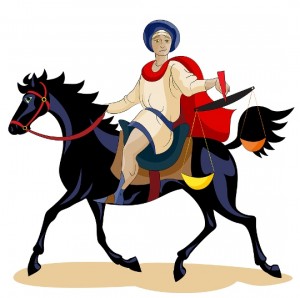 When first confronted with the coming of Christ in 70AD many have often asked, “Did every eye see him?”  The reason for this question is the problem some have with interpreting the second coming of Christ as a past versus future event. Revelation 1:7 reads, “behold, He is coming with clouds, and every eye will see Him, and they also who pierced Him. And all the tribes of the earth will mourn because of Him, Even so, Amen.” This text does harmonize with the AD70 return of Christ at the fall of Jerusalem.

First, the historical background of the text is found in Zechariah 12:10ff. This places the text in a Jewish historical context. Regarding the importance of studying the New Testament in the light of its Jewish context, Brant Pitre quotes Amy-Jill Levine:

Jesus had to have made sense in his own context, and his context is that of Galilee and Judea. Jesus cannot be fully understood unless he is understood through first-century Jewish eyes and heard through first-century Jewish ears. To understand Jesus’ impact in his own setting–why some chose to follow him, others to dismiss him, and still others to seek his death–requires and understanding of that setting. Amy-Jill Levine, quoted in Brant Pitre, Jesus and the Jewish roots of the Eucharist, p. 8-9.

The following quote is added by Pope Benedict XVI

It must be said that “the message of Jesus is completely misunderstood if it is separated from the context of the faith and hop of the Chosen People: like John the Baptist, his direct Precursor, Jesus above all addresses Israel (cf. Mt. 15:24), in order to “gather” it together in the eschatological time that arrived with him., Ibid.

Secondly, Jesus quotes the passage first in Matthew 24:30 and applies it to the fall of Jerusalem in 70AD. This is also a historical Jewish context. Third, John was present hearing how Jesus quoted and applied the text. Finally, in all three places where the text appears there are time clues which limit its application to the first century.

Zechariah and the Burden of the Lord

Next, because of the judgment that was coming upon Judah and Jerusalem, the land would mourn, (12:10). The mourning would be severe, ‘as one mourns for his only son,’ and ‘as one grieves for a firstborn’. It is the grief of death. These words call to remembrance the Exodus where all the firstborn of Egypt died on the night of the Passover when Israel escaped.

In this text, the words are prophetic and symbolic. They now suggest it is Judah who will mourn being describe in the New Testament as the city spiritually called Sodom and Egypt, where also our Lord was crucified, (Rev. 11:8). See also Gal. 4:21-31).

More proof of this is seen in verse 11, for it is ‘like the mourning at Hadad Rimmon in the plain of Megiddo.’ This refers to the mourning of Israel over the death of Josiah, the most pious king of Israel. He died quickly from the mortal wound of an archer in the valley of Megiddo, (2 Chron. 35:22-24). His death occasioned universal mourning in Israel.

Thirdly, the phrase “in that day” quoted repeatedly in chapters 12-14, clearly refers to a time following the cessation of inspired prophet, many years after the crucifixion. The Lord would come to do battle with Jerusalem accompanied by ‘all the saints’. (Zech. 13:1-6, 14:1, 5)

Therefore, the mourning would accompany death, not mere human death, but the death of the southern kingdom, or Israel as a nation. In this judgment, Israel (the unbelieving nation) would forever be separated from God as a nation. Nationally, they would be in eternal exile, although individually, they could seek God through the terms of the New Covenant.  According to Torah, they would no longer sustain an exclusive covenantal relationship with God.  See Deut. 5:1-3; Eph. 2:12.

Fourth, the mourning over this national loss is equally universal. The land (by metonymy, the people of Israel) mourn. Note, it is every family or tribe, (12:12-14).  The kings and nations who prospered in commerce likewise mourned the nation’s destruction (Rev. 18;9-10).

Jesus Quotes Zechariah in this Context

With this background, Jesus quotes the prophecy of Zechariah 12:10-14, placing it into a context of judgment upon national Israel. “Then the sign of the Son of Man will appear in heaven, and then all the tribes of the earth will mourn, and they will see the Son of Man coming on the clouds of heaven with power and great glory.” (Matt. 24:30). See also Matt. 23:32-24:3, 34.

Sixth, Jesus adds the element of the Son of Man coming on the clouds of heaven” to the mourning by all tribes in the land. In one graceful stroke he connects Dan. 7:13, not to the day of Pentecost (a common interpretation among Amillennial churches of Christ), but to the Olivet discourse. This is Jesus’ own inspired interpretation and application of Daniel’s prophecy. It serves to strengthen what we have said above on our text in Zechariah being a judgment context on national Israel.

Seventh, the setting of Daniel 7 is judgment. The court is seated, the books are opened, the best is destroyed. The son of Man who comes on the clouds in Dan. 7:13 is none other than the Ancient of Days (noted in Dan. 7:22). The problem many interpreters have with this text stems from the practice of seeking to interpret Daniel’s dream or vision (1:1-14) rather than listening to Daniels own interpretation give to him by the angel (7:16-27).

Compare an attempt to interpret the dream of Nebuchadnezzar (2:31-35) without reading Daniel’s revealed interpretation and explanation (2:36-45)!

Therefore, the Ancient of Days or Son of Man coming in clouds is a judgment text which Jesus places in the context of Jerusalem’s fall in 70AD. Further, in this event, i.e., Israel’s fall, the application of Zechariah 12:12 finds its historical fulfillment. It was then that all the tribes (every family) mourned. They saw Jesus, the Son of Man coming in judgment upon the nation.

Eighth, Jesus placed the mourning of all the tribes and his cloud coming within the limits of that first century generation. “Assuredly, I say to you, this generation will by no means pass away till all these things take place,” (Matt. (24:34).

Not only did Jesus say that the first century generation would not pass away, he clearly said that all things written would be fulfilled during the destruction of Jerusalem in 70AD. “For these are the days of vengeance, that all things which are written may be fulfilled. (Lk. 21:22).

Ninth, John, the Apostle was present on the occasion when Jesus prophesied the fall of Israel, (Mk. 13:3). He therefore heard firsthand how Jesus both interprete4d and applied the passages in Zechariah 12 and Daniel 7. He knew clearly that he context was the judgment of Israel. And, it is clear that Jesus does not quote either passage to explain a yet future coming beyond AD 70.

If we can credit the Apostle John with having any sense whatsoever, we should have no difficulty in accepting the following. Jesus sat face to face with John and tole him along with Peter, James and Andrew, that Zechariah 12:10-14 and Daniel 7:9-13 refer to the fall of Jerusalem. If John was going to do any teaching on the passages name, he would teach and apply them just as Jesus did. He would teach that the mourning of every tribe and seeing the Son of Man come in the clouds refer to Jesus ‘ return in AD70. He would be doing what he was taught. He would be following the Master’s footsteps and “reading his lips!”

John was given no other framework, no other time, no other event, than the coming of Christ to judge the nation of Israel in AD 70.

It should be noted that Revelation 1:7 is the second time Jesus gives the prophecy of Israel’s demise and mourning to John. Does he change his interpretation and application which he gave John during the Olivet discourse? Would that not be indeed strange and self-contradictory? Why would he place the mourning in Matthew 24:30 within the first century generation, then place the same mourning in Revelation 1:7 two millennia later?

Does Zechariah 12:10-14 and Daniel 7:13 mean something different during the revealing of the book of Revelation that it did not mean in 30AD? Does time change the meaning of God’s word? Listen to the text which John clearly says he received from Christ. (Rev. 1:1)

“Behold, He is coming with clouds, and every eye will see Him, and they also who pierced Him. And all the tribes of the earth will mourn because of Him. Even so, Amen, (Rev. 1:7). All the elements of Zechariah 12, Daniel 7 and Matthew 24 are set forth in the text.

One, it is the coming in clouds which Jesus said would happen before that first century generation passed, (Matt. 24:3, 30, 34). This is clearly Jerusalem’s fall. Two, it is a coming that would be universally seen. Note, all the tribes of the land (they who pierced him) would see. This again harmonizes with Zechariah 12 and Matt. 24:30. Three, it is a coming that produces mourning in the land of Israel among all the tribes, –again every family of Judah. Who can miss the parallels?

What right then does John have to change the interpretation to fit a 21st century and beyond application since Jesus does not give even the slightest hint that he is changing his earlier application of the text as given in Matthew? He does not. Further he commands them to keep the saying written in the book. Therefore, neither should anyone today seek to change them.

Finally, that the passage refers to AD70 and the coming of Christ at Jerusalem’s fall is clear from the time limitations in the first chapter and throughout the book. Those things would shortly come to  pass. The time was near, (Rev. 1:1-3). See also chapter 22:6, 10, 12. The text does not teach every eye will see him but every eye truly saw him!

Tags: Apocalypse, Book of Revelation, every eye will see him, He comes with clouds, Revelation 1:7
« In Isaac Shall Thy Seed Be Called
The Life Of Jesus Manifested In Mortal Flesh »