End of the World, Have Heaven and Earth Passed? Part 6 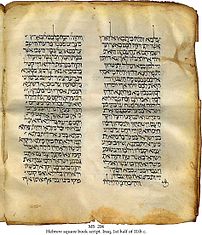 End of the World

This third segment on Eschatology – Have
heaven and earth passed?, is part of an
agglomeration of about seven posts we
made on this topic.

All of this information is only part of the
picture in the study of the passing of the
Old Covenant.

Here, we look into the New Testament
expressions of Christ and the Apostles to
note how they applied these texts from
the Old Covenant.

To begin, let us consider what should be a rather easy very to grasp.

Yet it’s meaning creates quite a disagreement among interpreters. The former two lessons on this topic are indispensable to get the full meaning of what we say here.

For assuredly, I say to you, till heaven and earth pass away, one jot or one tittle will by no means pass from the law till all is fulfilled.

The Lord gives an emphatic statement regarding the passing of the Law. It cannot pass until (a) heaven and earth passes away and (b) till all is fulfilled.

Christ defines “all is fulfilled” by stating that “every jot and tittle” of the law must come to pass. A jot and tittle were the smallest distinguishing characters of the Hebrew Alphabet.

We have a similar expression, when we say the dotting of an “i” and the crossing of a “t.”  That is how specific, precise and detailed the Lord is about everything being fulfilled before the law could pass.

The other measurement of the law passing is that of “heaven and earth.” Thus, Christ goes from the smallest known detail of the Jewish Alphabet, to the largest experience of their life, the passing of their world.

What World Would Pass?

The world or heaven and earth spoken about is the Jewish world. As stated in the previous lessons, God never spoke about the destruction of the universe. Yet, their are religious organizations who have claimed the law would not pass until the universe comes to an end.

They are predominantly called Adventists or Sabbatarians because of their emphasis on Saturday worship.

On the contrary, when the Lord, and later the Apostles spoke of the end of the world, they referred to the Jewish covenantal world. They drew on such passages we mentioned before:

Richard J. Clifford speaks of the image of Zion in the Hebrew Bible and in the culture of Ugarit, a city-state on the coast of Syria from a collection of tablets dating from the 14th century B.C.E.

Both in the Canaanite writings and in the genre of Israel, a mountain is given characteristics and potencies of cosmic, that is, of an infinite and universal scope.” Sinai & Zion, An Entry into the Jewish Bible, by Jon D. Levinson, p.111.

Levinson goes on to enumerate four characteristics o the cosmic mountain given by Clifford.

First, is the meeting place of the gods,” like the Greek Olympus.

Second, it is also “the battleground of conflicting natural forces.”

Third, and most significantly, the cosmic mountain is the “meeting of heaven and earth,” the tangent of celestial and mundane reality.

Fourth, “since it is the meeting place of heaven and earth, it follows that the mountain is also “the place where effective decrees are issued,” in other words, the moral and as well as the physical capital of the universe, “a place “involved in the government and stability of the Cosmos.”

Clifford, the Cosmic Mountain in Canaan and the Old Testament, quoted in Sinai and Zion pp. 111–112.

Remember, Moses received the Old Covenant in the mountain of Sinai, Exodus 19ff. Isaiah prophesied the new law would go forth from Mt. Zion and the word of the Lord from Jerusalem, (Isa. 2:2–4).

John, in the imagery of Revelation, is carried to a great and high mountain to see the coming of the new heavens and earth, the holy city. Rev. 21:1,2, 9.

Thus, when we read in Hebrews that the church had not come to Mt. Sinai, (the mountain of the giving of the Law), but to Mt. Zion, the new mountain of God, it is a contrast between the shaking and removal of the Old heaven and earth of the Old Covenant, versus the establishment and enduring permanence of the New. (Heb. 12:18–29).

The End of the Ages Have Come Upon Us

It is for reasons above, the apostles wrote in the first century that the world is passing away, 1 Cor. 7:26. It was the mountain or covenant world of Israel created in Sinai. That is the meaning of the old creation to Israel.

Paul wrote that the end of that world had come upon them.

Now all these things happened to them as examples, and they were written for our admonition, upon whom the ends of the ages have come.” 1 Cor. 10:11)

John writes the same of the Old Cosmos:

We conclude from this series of lessons that “heaven and earth” meaning the Jewish cosmos has passed away, along with the Old Covenant. We now have access to the new mountain of God, the new world of Zion in which we experience God’s righteousness through Christ.

File Attachment: LawofMoses.pdf (85 KB), outlining most of what we’ve covered in this series of lessons. To get the full study, covering texts as Colossians 2:14–16, Ephesians. 2:15, and 2 Cor. 3, order the new book, “When Was the Law Fulfilled,” (Are You Asking the Right Questions?)