End of the Law Romans 7

Romans 7 and Dying to the Law

Did the Law of Moses die in 30AD? Was all prophecy fulfilled at that time? Is it impossible for two laws to co-exist? Was there a lawful way to be free from the Law? What does Paul mean when he says, for I through the law am dead to the law? How could he be dead through that which no longer existed. His conversion was years after Pentecost, at which time the Law is asserted to be dead.

So, why would Paul (who excelled in Judaism beyond many of his contemporaries, Gal. 1:14), speak of being led to Christ through a Law that was dead. Can a dead tutor lead one to Christ? At the time of Paul’s conversion, the Law was yet operating in its tutorial function. 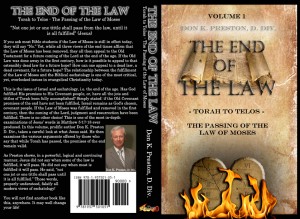 While Romans 7 certainly teaches that the brethren died to the Law, it is by no means exclusively taught in this text. We have just named one above in Galatians 2:19. Also, every text that appears to some to be speaking of the Law ending at the cross either have 70AD in view.  Such is the case with Gal. 3:19-27 when studied in context. See our “till the Seed should come video” to be posted here soon.

What we have found is many overstated cases for the end of the Law in 30AD. There are two many passages which are forced into that narrow time frame which cannot be explain in any rational and logical manner. For those interested in hearing friendly discussion on the two opposing views can check out the “As It Is Written” group on Facebook. Look for a discussion between myself and Patrick Donahue. Don Preston is also engaged in these studies.

The greatest objection lies in the apparent conflict of having two laws exist at one time. For many this is conceived to be spiritual idolatry, i.e. the worship of another god while following the gospel. This condition was uniquely specific to the Jews and only continued for the transition from 30-70AD. The fact that God would not allow the Law to be imposed on Gentiles demonstrated that two covenants were in force at the same time.

The gospel message to the Jews was that salvation would come to them as it had to the Gentiles, namely apart from the law which they would learn through the conversion of the Gentiles. As Paul stated, blindness in part happened to Israel until the fulness of the Gentiles had come in.

Now to argue that the fulness of the Gentiles is not now complete but continues throughout the gospel era, is to likewise argue that the Old Covenant Jews yet exist and are in blindness. If the fulness of the Gentiles has not ended, then the “blindness” of the natural seed of Abraham has not ended and God is yet in a covenant relationship with the natural seed. Thus, audience relevance is cast aside and Israel continues as God’s chosen people.

To stop anywhere short of an alleged second coming is to “cast away” God’s people. For more see the video on Romans 7 above. Stay tuned for our next video on Romans 11:27 and more coming to a theater near you.

Tags: Dead to the Law, End of Torah, Moses, Romans 7, The End of the Law
« Heaven and Earth Will Pass Away|Hebrews 1:10-12
Memphis Eschatology Conference It’s the Last Hour »