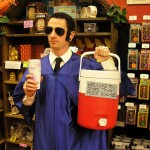 Do  we have spiritual gifts today? Have you ever turned on your TV to find men and women who claim the power to heal the sick, raise the dead, exorcise demons, handle poisonous snakes and drink poison without harm?  Well, perhaps not all of these, but we do hear of men who claim they can heal the sick.

Why is it that those who claim to heal always get to pick which gift they can exercise? I always say, let’s get the poison and make sure the miracle healers take a drink first. That way we will know they have the power. Then we can call in another miracle worker to raise him or her from the dead in the “unlikely” event something goes wrong.

Cruel you say? Yes, maybe, but not as cruel as all the millions of people who get swindled out of their money and misguided in their faith because they believe that someone has the power to work miracles. Let’s take a look at the spiritual gifts found in the scriptures and note a few quick points.

Spiritual Gifts Were Not Limited to the Apostles or Preachers

First, in the New Testament, we should be aware that the possession of supernatural gifts was not a “preacher only” thing. Rather, it also was largely a “pew member” experience. In other words, the proof of the authenticity of the preacher (in this case an apostle) was his ability to impart the gifts to others.

To this end, Paul wanted to go to Rome to impart spiritual gifts, namely to demonstrate that he had the signs of an apostle. “For I long to see you, that I may impart to you some spiritual gift, so that you may be established.” (Romans 1:11). So why aren’t these preachers freely sharing what they have “freely” received?

But, if everyone had their own gifts of the Spirit, why would they need the preacher to do all the healing and rake in all the cash?

To those who doubted Paul’s genuiness as an apostle in Corinth, he said:

“Truly the signs of an apostle were accomplished among you with all perseverance, in signs and wonders and mighty deeds.  For what is it in which you were inferior to other churches, except that I myself was not burdensome to you? Forgive me this wrong! (2 Cor. 12:12-13)

Paul, speaking of the abundance of the gifts he had given to the Corinthians, queries them by asking in what way were they inferior to other church members of other congregations who had the these miraculous gifts.  In his first letter to them, he said, they were inferior to none.

“I thank my God always concerning you for the grace of God which was given to you by Christ Jesus, that you were enriched in everything by Him in all utterance and all knowledge, even as the testimony of Christ was confirmed in you, so that you come short in no gift, eagerly waiting for the revelation of our Lord Jesus Christ. ” (1 Corinthians 1:4-7).

In other words, the Corinthians were not deficient as a congregation in the possession of the gifts. In fact, the only manner in which they came up short was that he refused to accept money from them for the ministry services he provided and “robbed other churches for support, (2 Corinthians 11:7-8).

Further in chapter 14, Paul told them to pursue spiritual gifts. So why, would there need to be a big time preacher standing before them boasting of his ability to heal, when they themselves possessed all the gifts they needed?

Through the Apostles the Spirit Distributed Gifts to All

“But the manifestation of the Spirit is given to each one for the proft of all:

But one and the same Spirit works all these things, distributing to each one individually as He wills. (1 Corinthians 12:7-11).

Not only were gifts given to all, but they were for the proft of all. So how do preachers and so-called healers get to pocket all the loot? And the profit here was not cash, but spiritual growth and perfection in the body of Christ, (Ephesians 4:8-13).

Nor did any of them have to take a spiritual gifts test to determine what was in their spiritual gifts inventory.  Those gifts were given directly to the church members through the laying on of the Apostles hands. (Acts 8:17-18)  They were “gift specific” so each person knew what gift they received.

“And God has appointed these in the church: first apostles, second prophets, third teachers, after that miracles, then gifts of healings, helps, administrations, varietys of tongues.

Are all apostles? Are all prophets? Are all teachers? Are all workers of miracles? Do all have gifts of healings? Do all speak with tongues? Do all interpret? (1 Corinthians 12:28-29)

A healthy variety and distribution of gifts helped to eliminate pride, misuse and abuse such as that caused by the tongues speakers in Corinth, (ch. 12-14)

This was in accord with the words of Christ who commissioned the apostles with the gospel. The “signs” would follow those “who believed” meaning the believers who responded to and accepted the apostles’ message of Jesus Christ as their Savior.

“And these signs will follow those who believe: In my name they will cast out demons; they will speak with new tongues; they will take up serpents; and if they drink anything deadly, it will by no means hurt them; they will lay hands on the sick, and they will recover.”

The first lesson of hermeneutics (interpretation) is to understand who’s speaking (1st person), who’s spoken to (2nd person and (3rd person), of whom or what is something spoken?

Now Christ is speaking, thus he is in the 1st person. He speaks to his apostles, they are 2nd person. He speaks about “them” or those who believe their words, thus believers who grammatically speaking are third person. What does this mean?

It means that those who were promised to take up deadly serpents, drink poison and heal the sick were also believers who heard and obeyed the words of the apostles.  Now if there were ever proof that these miraculous spiritual gifts do not exist in the churches today, the above should settle the matter.

That is not to say people do not have natural gifts or talents. Church members in the first century were also born with natural gifts and acquired talents as do we today. But, they had something we don’t have. Living, breathing apostles who were commissioned by Christ to lay hands on them and impart gifts they could not otherwise receive, even with money.

Simon the sorcerer is an example. You could not even “buy” your way into this ministry.  Simon was condemned and convicted for attempting to do so. Thank God, he repented of the sin as an example to all others.

“And when Simon saw that through the laying on the apostles hands the Holy Spirit was given, he offered them money, saying,

“Give me this power also that anyone on whom I lay hands my receive the Holy Spirit.”  But Peter said to him, “Your money perish with you, because you thought that the gift of God could be purchased with money!

You have neither part nor portion in this matter, for your heart is not right in the sight of God.

‘Repent therefore of this your wickedness, and pray God if perhaps the thought of your heart may be forgiven you. For I see that you are poisoned by bitterness and bound by iniquity.'”

So why do these modern day pseudo healers ask for the very filthy lucre that the Apostles refused with respect to healing and gifts?

The Corinthian Church Exercised the Gifts Until Christ Returned

A quick survey of 1 Corinthians  chapter 14 demonstrates that it was the members who were exercising the gifts.  Paul stated they would continue using those gifts until Christ’ returned, an event which occurred in their lifetime.  For they were told, the gifts would confirm them until the end or day of Christ.  See 1 Corinthians 1:6-8

So for any preacher today who claims to have the gifts, we not only want to see him drink the poison, but all his members who are the proof of his miracle-working claims should do so as well. Of course, I’m being facetious about the reality of doing this, but my point is dead-on serious.

Remember Jim Jones and Jonestown, Guyana.  And if any preacher asks you to drink the kool-aid laced with arsenic, run, run, run the other way.