Blessed Are the Meek For They Shall Inherit the Earth? 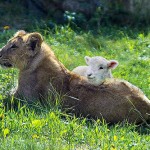 Lion and Lamb in the Kingdom

Just thinking about the beatitudes brings back memories of my mother and our family meals, especially on Sundays. Born the middle child of nine, we each sat around the table eager to share our meal whether breakfast or dinner. However, our mother had one rule, not one morsel of bread until we each had said our grace.

That meant reciting at least one of the beatitudes. Sometimes to help speed the process along, we’d look for the shortest verse, like “Jesus wept.” But in most cases it was always special to cite one of the beautitudes. It showed a certain “refinement of culture” in our home.

So, we got to know those first seven of the eight beatitudes in Matthew quite well. But after I became interested in eschatology, I realized that these verses meant much more than is expressed in grace before meals. They were the essence of the hope in the kingdom and Christianity.

However, I find that many do not perceive the depth nor eshcatological significance of the beattitudes. Some view them with a short-sightedness seeing them fulfilled in the Pentecost time from of Acts 2. This is largely an Amillennial influence and position.

Blessed Are The Meek for They Shall Inherit the Earth?

Jehovah’s Witnessess have canvassed the pavement suggesting to us that God would renew the earth so that the righteous might experience utopia on the planet.  Others whom we style futurists (those who believe Christ is yet to come) reason that inheriting the earth happens in the “by and by.”  If that is the case, of what comfort is the planet to those who no longer reside on it, especially if it’s end is a fiery destruction?

It is best for us to seek a biblical understanding of the “earth,” as used in the text. Only then can we grasp the meaning of Jesus’ words. The promises God made to man are all rooted in the promise to Abraham, per Genesis 12:3. “And in you all families of the earth shall be blessed.” So first and foremost, we should investigate this subject from the perspective of the Abrahamic promise.

For the promise that he would be the heir of the world was not to Abraham or to his seed through the law, but through the righteousness of faith.” (Romans 4:13)

Thus, God did promise that Abraham would inherit the world. However, we cannot conclude here that we have a clear picture of what this means. One point to note is that God would not grant the promise to Abraham through the law of Moses, but through the righteousness of faith, for the law makes void the promise rendering it of no effect.

“For if those who are of the law are heirs, faith is made void and the promise of no effect.” (Romans 4:14)

Therefore, to reconstruct the vestiges of the law, i.e. the temple, the sacrifices, and the levitical priesthood as a vehicle or portal through which God will fulfill the promise to Abraham is an alien concept to the word of God.

For these reasons and from what follows, the Zionist movement was a lost battle before it ever began.  It’s fallacious premise was already decreed in the word of God.

The Hebrews letter makes clear that Abraham and the patriarchs did not see Palestine (the land of Canaan) as God’s inheritance in fulfillment of the promise. Why? It is because they died in faith. What is faith? Faith is the substance of things hoped for, the evidence of things not seen.” (Hebrews 11:1).

Thus, although Abraham, Isaac and Jacob “sojourned” in the land of Canaan, it was not their true homeland. They confessed they were strangers and pilgrims “in the land.”

“These all died in faith, not having received the promises, but having seen them afar off were assured of them, embraced them and confessed that they were strangers and pilgrims on the earth.”

The rendering in Hebrews 11:13, “on the earth,” (NKJV) more accurately means the land of Canaan where these Patriarchs sojourned.” What follows is critical to the point.

“For those who say such things declare plainly that they seek a a homeland.”

Yes, Abraham, Isaac and Jacob were seeking a homeland, but not in the one in which they then lived. To the contrary, they died in hope of the country God would give them at a future time. Most importantly, Abraham would inherit this land, before his descendants, which is precisely the opposite of how the physical land of Canaan was given.

“And said to him, ‘Get out of your country and from your relatives, and come to a land that I will show you.’

Then he came out of the land of the Chaldeans and dwelt in Haran. And from there, when his father was dead, He moved hm to this land in which you now dwell.

And God gave him no inheritance in it, not even enough to set his foot on. But even when Abraham had no child, He promised to give it to him for a possession, and to his descendants after him. “(Acts 7:3-5)

So, anyone claiming today that they are inheriting the present land of Palestine because God gave it to Abraham, is (1) inheriting more of it than did Abraham and (2) receiving it before he got even a shoe sole’s worth.

Again, note that the “land” God would give Abraham in fulfillment of the promise is given to his descendants after him, i.e. after he receives it first.  It is way too late for that to happen with Palestine.  As the Jews in conversation with Christ stated of his biological demise, “Abraham is dead.” (John 8:52)

Thus we see that Abraham didn’t even want a shoe print of that land.  Why? Because he saw something better.

Abraham and the Patriarchs Desired A Better Land or Country

“And truly if they had called to mind that country from which they had come out, they would have had opportunity to return.

But now they desire a better, that is, a heavenly country. Therefore God is not ashamed to be called their God, for He has prepared for a city for them.”  (Hebrews 11:15-16).

What is very interesting about not only this verse, but the context of Hebrews is that at the very time Paul penned this the letter, Christian Jews had already taken flight from the land of Canaan, (13:14).  Yet, like Abraham, they were looking for the city God had prepared and which was then yet to come.

How then could the land of Palestine be any hope for a Christian Jew or Gentile? It wasn’t and is not.  They were not looking to go back to what they had already left behind.

Against this backdrop, and although Abrham had physically died, Jesus’ words that ‘God is not the God of the dead but of the living,’ testified that Abraham, Isaac and Jacob yet lived. Not only did they yet live when Paul wrote Hebrews but they yet hoped for the city which had foundations whose builder and maker was God.

This is another proof that Canaan or Palestine was not their hope, for they would never return to that land. Who wants to be resurrected to live in Palestine? I wouldn’t. I don’t even care to live there before death!

The statement, “But now they desire a better, that is, a heavenly land,” expresses their hope at the time Paul wrote.  This was the essence of their faith while they yet lived in “seeing afar off” the fulfillment of the promise. However, now we must examine how far off that promise was when Paul wrote Hebrews. In so doing, we will find the time that the meek inherited the land.

Imminent means something is ready to take place as in hanging over one’s head, (Webster).  Of the promise made to Abraham, that he would be the heir of the land, Paul says it was about to come in a very little while. It was imminent.

“For you have need of endurance, so that after you have done the will of God, you may receive the promise: For yet a little while, and He who is coming will come and will not tarry. ” (Hebrews 10:36-37). This verse shows the promise of Abraham is fulfilled in Christ’s second presence.  It is the arrival of the kingdom of heaven.

Paul wrote centuries ago that in a very little while Christ would come without delay that they might receive the promised inheritance. That inheritance was none other than the kingdom of God. For in chapter 12:28, the saints were already in the process of receiving it.

“Therefore, since we are receiving a kingdom which cannot be shaken, let us have grace, by which we may serve God acceptably with reverence and godly fear.” (Hebrews 12:28).

We submit that the land Abraham waited and hoped for was none other than the kingdom of God, the new heaven and earth. That is the land of Matthew 5:8. That is also why most of the beatitudes point to the kingdom. (See also Matthew 8:11-12).

That is what it means for those who hunger and thirst after righteousness shall be filled. They are filled with the kingdom of God and his righteousness, the hope, promise and blessing of Abraham. The meek have in fact inherited the land, i.e. the kingdom.