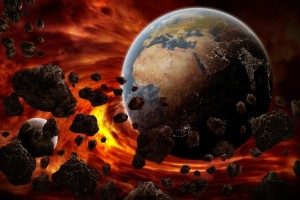 In End Times Controversy, p. 399, (2003), Thomas Ice listed the following practical implications of Dispensationalism if the tribulation and the coming of Christ’s are past events:

It has and continues to be the practice of Dispensationalism to align current events with fulfilled Bible prophecy. However, this has not worked. Taking their clue from the settlement of Israel as a “Super Sign of the End” they plummeted head first into Super fabrications about the end times.

For example, consider a recent blog post by Joel C. Rosenberg, who claims that Israel faces nuclear threats from Iran. This follows a long series of dispensational “proofs” from John Hagee. These men are preachers, yet they are privilege to know the military strategies and secrets and policies of nations. Hagee wrote in his original, “Jerusalem Countdown (2006), page 8 quoting Rosenberg that on or before January 2006, Iran would finally have the technology to produce highly enriched uranium. On April 2005, Hagee reported that his sources revealed Iran would have nuclear weapons ready by April 2006.

This hype caused many Christians to believe an imminent showdown between Iran and Israel fomented on the horizon. Hagee was all over the media calling for pre-emptive strikes on Iran.  In a new book, published February 14, 2014, entitled “Manufactured Crisis” The Untold Story of the Iran Nuclear Scare” review by  stated:

“It is worth noting that, in its quarterly reports to its board of directors, the International Atomic Energy Agency (IAEA) verified that as of November 2013, Iran’s stock of 20 per cent enriched uranium had been reduced from 431 pounds to 351 pounds, which is significantly less than the 550 pounds required for the production of one nuclear weapon. This sign of good faith on Iran’s part suggests that it is serious about the agreement and is a good omen for the future of the long-term deal.”

In addition, the according to the review, it is suggested that:

the US and Israel fabricated the crisis to serve their political and bureaucratic interests and put pressure on Iran to give up its nuclear programme completely, even though there is no evidence supporting the claim that it is intended to produce nuclear weapons.’

What does such research as that above say about the prophetic fabrications of Rosenberg and Hagee? If the above research is true, there is no real nuclear threat from Iran. Why are Christians being lied to so they can support Israel? We are not saying these message were offered in an attempt to deceive. But, if these men have the ability to discern and determine true prophecy from God and proclaim it to others shouldn’t there information be correct?

Doesn’t that make God look rather foolish if he doesn’t know what’s in the minds of men and misreports it to his spokesmen? When Moses when before Pharaoh, God always told Moses exactly what Pharaoh was thinking, what he was going to say and how he would react. Not once did he fail or miscommunicate to Moses.

When Daniel interpreted the dreams of Nebuchadnezzar about the next 600 years of history, he never failed in one detail. Yet, how could these men get something so important so wrong? How could they not know deception was involved? Why are they urging Christians to buy into this deception as they erroneously claim it is the Bible coming true?

Ice’s two points of the delegitimizing of Dispensationalism are (1) Christ’s coming is past and (2) the tribulation is past. Jesus answers both of these points in Matthew chapter 24. He taught that his coming (Parousia) and the arrival of his kingdom occurred within one generation (40 years) of uttering the prophecy.

When asked about the timing of his coming, he gave several signs by which the disciples were not to be deceived, Matt. 24:4-7. He gives them signs of when and how they must flee when the temple was being desecrated by zealots in fulfillment of Daniel 9 27, (Matt. 24:18-21). In the latter verse Jesus specifically mentions the great tribulation saying it would be during the times when the saints would flee the city of Jerusalem.

Thirdly, he mentions his coming to destroy ancient Israel, and their temple and assures them it would occur within their very own generation (a generation in the Bible is 40 years).

Assuredly, I say to you, this generation will by no means pass away till all these things take place, Matt. 24:34

This verse not only refers to the destruction of the temple in 70 A.D. by the Romans (also mentioned in chapter 23:34-38) but also to the great tribulation which preceded it (21-29). Thus, Ice’s practical implications for the dispensing of Dispensationalism are established. Not a single item in the list above can be established and Dispensationalism is thereby discredited.

But What About No Man Knows That Day and Hour?

We often here objections to our message that Christ has come, but those who cite Matthew 24:36 in an attempt to negate the above conclusion. Others acknowledge there was a coming of Christ in judgment of ancient Jerusalem. The city, destroyed by Titus, a Roman general is  undeniable and is recorded by eye-witness Flavius Josephus, a Jewish general and historian, who surrended to the Roman army.

The argument is superficial. A distinction must be made between the “generation” which Jesus did in fact know at the time, and the precise day and hour which he did not know at that time. Zechariah alluded to this time also (14:6).

Jesus said his coming would be as was the coming of flood in the days of Noah (Matt. 24:37-39). At the first, God revealed to Noah the flood would come in his generation, (Gen. 7:1). Later, he said, “after 7 more days” revealing a more specific time frame. The rest of the world knew not until the flood came. Noah, however knew it would occur within his lifetime, first generally, and later more precisely.

That is the meaning of Matthew 24:36. It is not a division or change of subject from the destruction of Jerusalem in A.D. 70 to a yet future coming of the Lord. Rather it is a shift in focus from the general time of the overthrow of the temple to the specific day and hour. Jesus yet spoke of one event.

We have noted that Ice realizes there can be no such validity to the doctrine of the Dispensationalism, the tribulation, national blessings or prophetic significance of Israel, a future Antichrist or false  prophet, etc. In fact, non of the major tenets of Premillennialism are true. Jesus’ coming occurred within the first century generation.  No current events today are examples of Bible prophecy coming true.