2 Peter 3 End of the Universe or Jewish State?

Is 2 Peter 3 the End of the Universe or the Jewish State in 70AD? 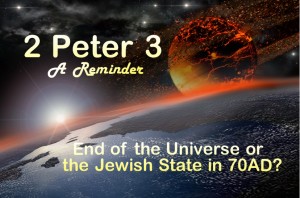 According to John MacArthur, preacher for the Grace Community Church, the Lord is at hand, the world is about to come to an end. That is what he teaches and preaches in his video series on 2 Peter Chapter 3.

But, is this correct? MacArthur apparently sees signs of the end. He interprets the “at hand” message of Revelation. MacArthur’s doctrine of end of the universe is similar to that of Chicken Little who went around crying that the sky was falling.

He claims that the apostles taught the end was near. That is true. The question is when was the end near? Is it near today or was it near at the time 2 Peter was written?

In the video you will learn where Peter drew his information for his writings in 2 Peter 3. It was not on CNN or Fox News. It was not from a local radio broadcast or newspaper headline.

Peter drew his information from the inspired word. He used 1 Peter as his source to write his secondly epistle. He tells you that himself.

What Peter Reveals Is Most Striking

What Peter says in 1 Peter eliminates the rants from the modern-day profiteers. He addresses a specific audience living in his day, the Diaspora of Pontus, Galatia, Cappadocia, Asia and Bithinia.

These were people living in his day and time. They were experiencing some of the most severe persecution. They also firmly held to a steadfast hope.

The time was near in their day. Look for the evidence in the video. See how it clearly distinguishes fact from fiction.