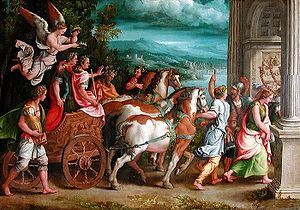 Those who see our times as the last days often appeal to the words of Christ in which he predicted famine and pestilence. These words are found in Matthew.  John Hagee as Dispensationalists are fond of doing, believe that the newspaper headlines and current events unveil the road map of the end.

However, we show that Hagee’s 10 Road Signs to Armageddon End Times Lead to the Past. As in the previous seven signs we noted before, this sign of famines and pestilences also belongs to Israel’s past history. Christ’s words key us in to the fulfillment.

“And you will hear of wars and rumor of wars. See that you are not troubled: for all these things must come to pass, but the end is not yet. For nation will rise against nation, and kingdom against kingdom, And there will be famines, pestilences, and earthquakes in various places. All these are the beginning of sorrows.” (Matthew 24:6-8)

Famines and pestilences marked much of the landscape of Jerusalem and Judea in its final days before its collapse. Josephus records that a famine occurred in during the siege of Jerusalem in 70 AD on the Jews that is unsurpassed for its horror and devastation experienced by the people. This famine came in direct consequence of the prophecies of Christ and the subsequent disobedience and rebellion of the Jews.

The Bible records a great famine that came to pass in the reign of Claudius Caesar.

And in these days prophets came from Jerusalem to Antioch. Then one of them, named Agabus, stood up and showed by the Spirit that there was going to be a great famine throughout all the world which also happened in the days of Claudius Caesar.” (Acts 11:28)  These were days leading up to the siege upon Jerusalem by Roman General Titus.

During the actual siege of the Jerusalem, horrific crimes against humanity were committed because of the famine. Those strong took advantage of the weak, leaving some with more than enough while others starved to death. The famine was so severe that modesty failed. Children literally pulled food out of their parents’ mouths. Even worse, mothers pulled food from their infant’s mouths.

Family members stole food from others, only to have the seditious break in and literally take food almost down their throats and also beat them for trying to conceal or hold on to it. Women who sought to hide food had their hair torn out. Nor did they spare children or infants. They invented torturous tactics, beating them and abusing men and women in ways unmentionable. Josephus Book 5, Ch. 10, Sec. 3.

Of Jerusalem, the historian says, “That neither did any other city ever suffer such miseries, nor did any age ever breed a generation more fruitful in wickedness than this was, from the beginning o the world.” Ibid, Sec. 4

Next Josephus records that due to the zeal, competition and desire to please Caesar Titus’ soldiers built a wall around the city of Jerusalem in three days that otherwise would have taken months. They kept a vigilant watch that none would escape from the city. This shows the wisdom and foresight of Christ who warned his disciples to flee the city at the first sign of the approaching Roman army which they did, (Matthew 24:15-18; Luke 21:20-22).

“So all hope of escaping was now cut off from the Jews, together with their liberty of going out of the city. Then did the famine widen its progress, and devoured the people by whole houses and families; the upper rooms were full of women and children that were dying by famine; and the lanes of the city were full of the dead bodies of the aged; the children also and the young men wandered about the market-places like shadows, all swelled with famine, and fell down dead wheresoever their misery seized them.

As for burying them, those what were sick themselves were not able to do it; and those that were hearty and well were deterred from doing it by the great multitude of those dead bodies, and by the uncertainty where was how soon they should die themselves; for many died as they were burying others, and many went to their coffins before that fatal hour was come!” (Book V, Chapter 12, Sec. 3, 4).

The robbers stole the clothes of those dying from famine, and when the bodies were too numerous to bury, they cast them down the wall into the valleys below. Others, begged to borrow the arms and swords of the robbers to hasten their death, and they refused them adding insult to their misery.

Likewise they were tormented by the Romans who had plenty of corn and who would torment the Jews even more to make the sensitivity of their lack even greater. Yet, the Jews refused to surrender, though surrounded and perishing. They committed national suicide. Many leaped from the walls in despair. Others took up stones and fled out of the gates only to desert to the Romans.

However, they too were met by an unhappy fate. Many of them whose bodies were bloated and swelled from starvation, could not restrained themselves from the plenty of food in the Roman camps. Thus, they filled their bodies until they burst asunder. Others, who did so restrain themselves, were caught cutting gold pieces out of the excrement of those who died as they swallowed it due to the abundance of gold which was in city.

However, once the Arabians and Syrians became privy to it, they slew and dissected the bellies of all the remaining escapees. Now that these and other famines which preceded Jerusalem’s fall are well documented in history, in the light of Jesus’ words, why look elsewhere than upon the nation responsible for murdering Christ and his apostles and saints to fill up the measure of their sins in murdering the prophets, (Matthew 23:34-38.

The famines are associated with the overthrow the temple and the Jewish nation in 70 AD. These famines are the same referred to in Revelation 6:5,6. It speaks of the dire straits of the city in the time of the siege.

Jesus said that the famines were the “beginning of the labor (birth) pangs but the end was not yet. Thus, famines and pestilences which occurred prior to the siege were God’s warnings that he did not want any to perish but to repent. But, even through 40 years of preaching by Christ and the Apostles until that fateful siege with Titus’ pleas and attempts at reasoning with the Jews, accented by their want and misery, they refused all the way down to the last hour. They famine they experienced while surrounded and locked up in the city was of their own doing and direct consequence of the destruction of the city.

These signs belong also to the words of Christ which form an impenetrable fortress wall around Bible prophecy that all must happen before the first century generation passed. “Assuredly, I say to you , this generation will by no means pass away till all these things take place.” (Matthew 24:34).

That there are famines and pestilences occurring today as they have throughout history since A.D. 70, is not to be denied. We can turn on our TV’s any day or night of the week and find bloated bellies of starving children in villages around the world. In America, the richest country on earth, we have people who are starving.

Aids, and other viruses, incurable diseases, health epidemics and pestilences claim the lives and well-being of millions. But so also did polio, the bubonic plague, small pox, typhoid fever, and a host of others. We have new ones as well.

However, the famines of Matthew 24:7-8, belong specifically to the prophecies and warnings of the Jewish covenant. “If you do not carefully observe all the words of this law that are written in this book, that you may fear this glorious and awesome name, THE LORD YOUR GOD, then the Lord will bring upon you and your descendants extraordinary plagues—great and prolonged sicknesses.

Moreover He will bring back on you all the diseases of Egypt, of which you were afraid, and they shall cling to you.

Also every sickness and every plague, which is not written in this Book of the Law, will the Lord bring upon you until you are destroyed.  You shall be left few in number whereas you were as the stars of heaven in multitude, because you would not obey the voice of the Lord your God.” (Deuteronomy 28:58-62).

“And I will bring a sword and against you that will execute the vengeance of the covenant; when you are gathered together within your cities I will send pestilence among you; and you shall be delivered into the hand of the enemy.

When I have cut off your supply of bread, ten women shall bake your bread in one oven, and they shall bring back your bread by weight, and you shall eat and not be satisfied. After all this, if you do not obey Me, but walk contrary to Me, then I also will walk contrary to you in fury; and I, even I, will chastise you seven times for your sins. You shall eat the flesh of your sons, and you shall eat the flesh of your daughters.” (Lev. 25:25-30).

Thus, all the famines and plagues of the end times were the result of covenant curses upon the people for disobedience to the Law of Moses. See also Famines in Divers Places, Signs of the End.

For a better understanding of how the prophecies of Christ were fulfilled, see our book, the Re-Examination, a Study of Christ’s Second Coming.